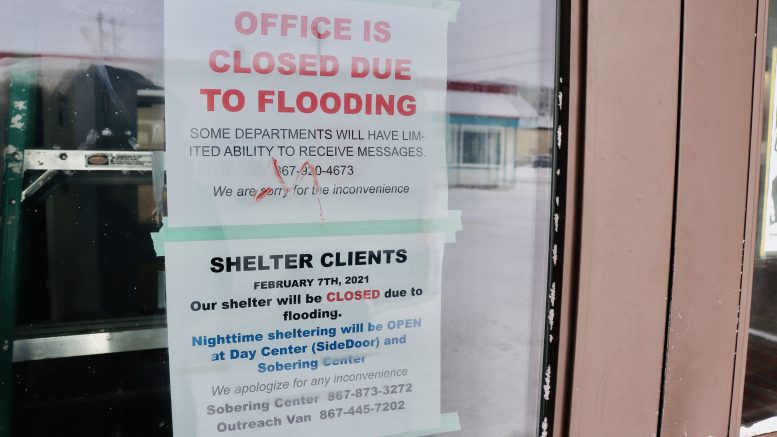 The Salvation Army in Yellowknife has had to close its doors, after a flood occurred on Sunday. (Mariah Caruso/CKLB)

“I remember looking at the firefighters saying ‘I don’t know what we’re going to do with our folks’,” says Jason Brinson, executive director for the Salvation Army.

The Salvation Army has temporarily closed its doors after a flood occurred Sunday morning.

“It was raining in the shelter,” he adds, which affected all four floors.

Water started leaking from the fourth floor, “in a large quantity very quickly,” he says.

“We’re not 100 per cent sure what exactly happened.”

Fire services reported to the scene, turning the water off fast enough to mitigate some of the damage.

At this time, approximately 14 people were evacuated from the building.

“I was worried about the people. The people were my primary focus,” he says.

Brinson says they’ve been in clean up mode since Sunday and believes the leak came from the sprinkler system.

A city council meeting on Monday confirmed that guests had been displaced to the Mine Rescue Building.

Services offered by the Salvation Army will be temporarily suspended until the building is fully operational—this includes the food bank.

The Salvation Army thrift store is unaffected by the flood.

Emergency crew are still investigating the full extent and cause of the leak.

“We are people of faith—and so we know that everything is going to work out,” he says.

Brinson hopes the building will open up in the next few days and says an update will be posted on Facebook.

‘We’re going to do everything we can to help them:’ MP McLeod is advocating for flood victims