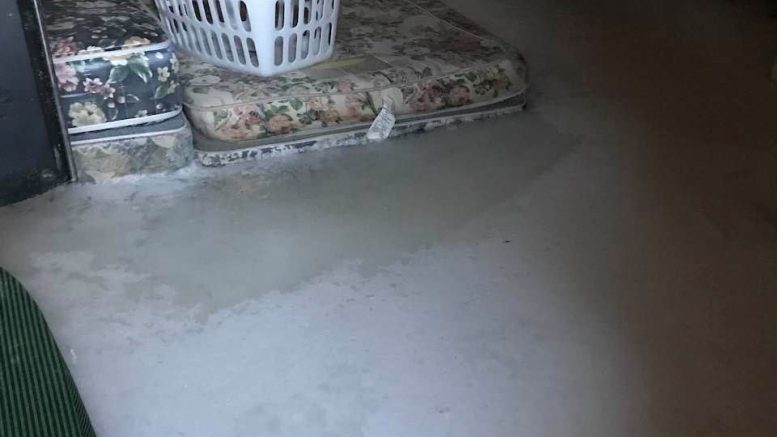 The flooding has frozen important equipment which will be inaccessible until the spring. (Photo courtesy of Arthur Beck.)

A trapper who had his Taltson River cabin flooded says the government compensation will help him, but he’s worried about the long-term effects of the flooding.

Arthur Beck told CKLB in an interview at the time that trappers would need assistance from the territorial government.

Last week Shane Thompson, minister of Environment and Natural Resources, announced that each trapper could be eligible for up to $40,000 in compensation.

Beck says the amount should be enough for him, but other trappers may have lost a lot more.

“My brother downriver, he almost finished building this tourist camp. He’s got about 20 cabins,” he says, adding these cabins were elevated to protect from flooding, but now have ice up to their windows.

Beck also worries flooding will be a recurring issue and will require trappers to retrofit their cabins, costing them even more. This could include raising their cabins.

Beck adds he expects it to take awhile for the wildlife that died from the flooding to repopulate.

CKLB Radio has reached out to ENR to see what the timeline would be for animals to repopulate and what the long-term plans are to prevent flooding, but has not received a response in time for publishing.

Beck broke the news of the flooding when he posted photos of his trapping cabin under several feet of ice on social media in January.

“It went at least 12 to 15 feet above the old high watermark,” he explains, “the cabins and equipment are all under ice.”

This is down Taltson River 70 miles below the dam. They let water out 3 times October. November. December 2020 the…

Beck believes the flooding was caused by the nearby Taltson Hydro dam, which the Northwest Territories Power Corporation (NTPC) denies.

“There were no planned or unplanned water releases from the Taltson facility that would have resulted in higher downstream water levels,” Doug Prendergast, spokesperson for the NTPC, wrote in an email at the time.

The NTPC and ENR say the flooding is caused by “unprecedented” high water levels.

Beck says he’s been in touch with representatives from ENR to discuss what has been lost in his cabin.

He adds the property has been in his family for generations, making it difficult to know exactly what’s been lost.

“They ask us what’s there, but I can’t remember everything,” he says. “I’ve been putting stuff in there since I was a little kid.”

MLA wants to make power limiters illegal in the winter


Jackie Jacobson says the use of power limiters is “inhumane” during the winter months.

‘Ice right up to the windows’: Trapping cabins near Taltson River flooded, frozen


Arthur Beck says his trapping season is finished as all his trapping equipment is under several feet of ice.