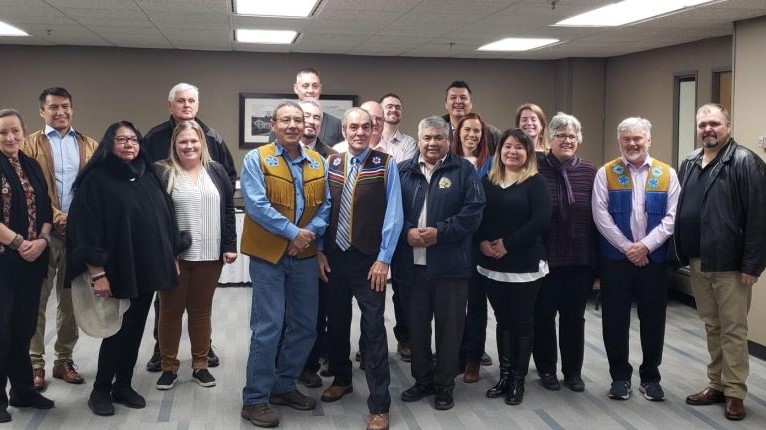 Dene National Chief Norman Yakeleya has expressed the importance of working with Dene people in the Northwest Territories as he sat down with 16 of the 19 MLAs-elect on Tuesday.

Yakeleya talked to the incoming 19th Legislative Assembly members about the key priorities and issues facing the Dene in the North.

“Our breakfast this morning is a historic one. Never before has the executive of the Dene Nation met with the members of the legislative assembly like this at such an important time, about such pressing matters,”Yakeleya said. “With over 25,000 Dene members in the Northwest Territories and across Canada, the Dene people have many heart beats, but one Dene drum. The Dene Nation asked you here today to speak with you about the most fundamental issue that informs all else: our relationship with this assembly.”

Yakeleya illustrated the significance of building a strong and productive relationship between both the Legislative Assembly of the Northwest Territories and the Dene Nation, considering the low point in relations over the years.

“I wanted to show the newly elected MLA’s the powerful history and traditions that shape the Dene people. To experience the importance of our culture and traditions while working together as our Elders have expressed and guided us,” Yakeleya said.

Yakeleya, who is also the regional chief for the NWT in the Assembly of First Nations,  says he concluded the discussions with the confidence that these newly elected Members of the Northwest Territories Legislative Assembly will work together meaningfully with the Dene Nation, Dene Governments and All Indigenous Governments to provide real solutions for all northerners.

It’s unclear why three MLAs-elect were unable to attend the meeting.