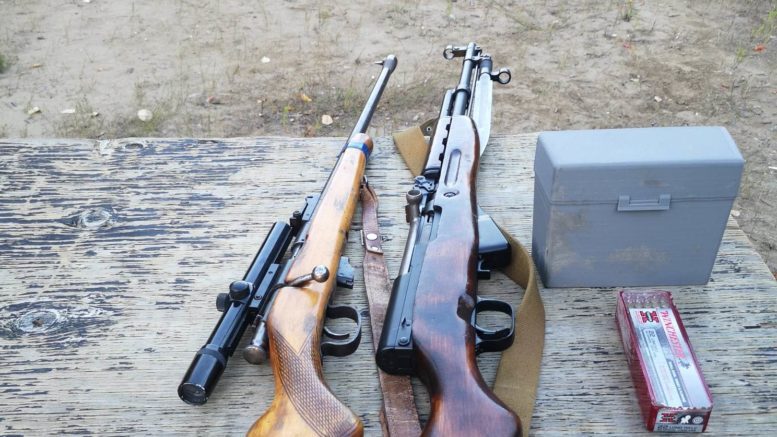 In a photograph, William Alger’s SKS semiautomatic rifle lies next to his grandmother’s old .22. As a hunter and land defender in the Dehcho region, he isn’t the first person in his family to wield a firearm.

Now, he’s worried about carrying on that tradition.

The SKS, in all of its variations and modifications, is one of the rifles targeted by name in a proposed set of amendments to draft Bill C-21.

“Technically they shouldn’t even be taking my firearm away because of the Treaty 11 rights I hold,” says Alger. “It’s the only tool I have that allows me to be out on the land harvesting in a safe manner.”

The bill was intended to curb gun violence by introducing harsher penalties for infractions and tightening restrictions on handguns, among other measures.

But late last month, after the bill had passed second reading, Liberal MP Paul Chiang proposed a series of amendments. These included a list of firearms that would become illegal. That list includes the SKS.

The Liberal government has since backpedaled on these amendments: Shortly after the amendments were made public, Prime Minister Justin Trudeau said the bill is being reviewed to ensure it doesn’t target hunting rifles or shotguns.

But NWT gun owners are still worried about what C-21 will mean for them.

Stenvne Thomas of Yellowknife is both a hunter and a competitive shooter. “I’m a law-abiding citizen, I’ve never been charged with a crime,” he says. “I support my family, I support my community.”

“I’m a law-abiding citizen, I’ve never been charged with a crime.”

Although he’s hesitant to name the models he owns on the record due to the proposed legislation, he says 12 of the 14 rifles he owns would become illegal if C-21 and its amendments are passed.

Tim Thurley, also in Yellowknife, is a hunter who harvests to save on his family’s grocery bills. He’s also written a master’s thesis on firearm regulations and homicide in Canada. He’s opposed to the bill outright, in part for the impact the handgun restrictions will have on sport shooting and the industry in general.

But he says the proposed amendments are “the most egregious part” of the legislation. “The SKS is one of the most common budget hunting guns in Canada, right up there with the Lee Enfield,” he says. “Statistically, given how common it is in Canada, the SKS’s inclusion alone is going to ensure a huge number of PAL [Possession and Acquisition Licence] holders are badly impacted.”

“It’s quite an achievement to get the Conservatives, NDP, and AFN all standing together against a bill. Yet the government managed — mismanaged — it.”

‘It needs cleaning up’

Like many northerners, Northwest Territories MP Michael McLeod says he’s handled guns since he was a toddler.

He says his constituents are confused about the law. “The bill is not clear; The bill is very difficult to read,” he says. “It should be clear; People should have the comfort of knowing, okay, my gun is on the list or it’s not on the list, but it doesn’t work that easy.”

“People should have the comfort of knowing, okay, my gun is on the list or it’s not on the list, but it doesn’t work that easy.”

There’s confusion on Parliament Hill too: One of the amendments would ban weapons that produce more than 10,000 joules of energy. “I keep hearing other MPs say, ‘Well, only people that shoot elephants will use a gun like that with 10,000 joules,” says McLeod. “But there’s buffalo hunters that have used guns of that calibre.”

McLeod says he supports many sections of the bill, including more resources to fight weapons smuggling, red and yellow flag laws, and new restrictions on handguns.

‘Attack the root causes of violence’

Rod Giltaca is the CEO and Executive Director of the Canadian Coalition for Firearm Rights (CCFR). He says hunters who have been paying attention to the bill are furious. “They’ve been assured repeatedly, ad nauseam by the Liberals and their supporters the NDP, that this is not a hunting rifle or hunting shotgun ban,” he says. “And, of course, this amendment that has been brought forward is affecting a tremendous amount of firearms that are appropriate for hunting.”

Earlier this month, the CCFR came under fire for using the promotional code “POLY” for its online store in the days leading up to the anniversary of the École Polytechnique massacre. The organization says the promotional code wasn’t a reference to the shooting, but was instead a reference to the Twitter account for PolySeSouvient, a gun control advocacy group that sprung out of the massacre and has been critical of the CCFR.

“If we attack the root causes of violence — and that’s lack of opportunity, unemployment, there’s some socioeconomic issues there — if we deal with those societal issues, then violence will go down across the board, including gun violence,” says Giltaca.

Heidi Rathjen, the founder and director of PolySeSouvient, says much of the opposition to the Bill is based on misinformation.

“This is not only a complex amendment, it’s also in a complex field,” she says. “Everybody knows that it’s incredibly difficult, if not impossible to draw a clear line between hunting rifles and assault weapons.”

“Everybody knows that it’s incredibly difficult, if not impossible to draw a clear line between hunting rifles and assault weapons.”

For example, firearms like the Weatherby Mark V and the Mossberg 702 Plinkster, which appear on the list, were already banned by a 2020 Order in Council, following the massacre in Nova Scotia.

“We feel that if people would actually understand the impact of the amendment, a lot of the opposition from hunters, from Aboriginals — not all, obviously — would not be there,” says Rathjen. “And then we can concentrate on looking at the list and seeing if there are weapons that are anomalies, that fell on the wrong side of the line.”

Contrary to popular belief, she says PolySeSouvient would be open to a review of the bill’s amendments to exclude rifles that could “reasonably” be considered hunting rifles.

She says the SKS, the rifle Alger uses, is likely one of those exceptions.

For Alger, the right to use a weapon for hunting is a matter of reconciliation. “If they really want to do that the right way, this is doing more damage than it is making amends for the past.”


No charges have been laid in connection with the raid