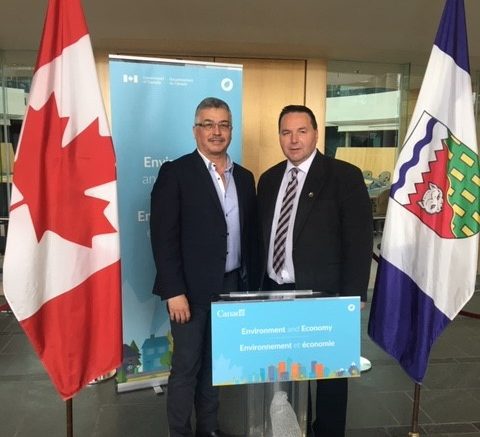 A photo of Michael McLeod, left, and Wally Schumann was posted to McLeod's Facebook page Friday

Michael McLeod, the MP for the Northwest Territories, has announced up to $8 million in federal support for the Government of the NWT’s new Greenhouse Gas Grant Program for Buildings and Industry.

According to a news release from the Federal Government issued Friday, The new application-based grant program will support projects that reduce greenhouse gas emissions from heating, electricity, transportation, and industrial processes.

The program will lower the upfront cost of energy efficiency retrofits, like space heating boiler and district heating systems, ensuring that the transition to a clean economy is affordable for all.

The release states that people in the Northwest Territories are feeling the impacts of climate change in their communities.

It adds Canadians want to fight climate change, to be part of the solution, which is why Canada and the Northwest Territories are working together to reduce pollution, create good jobs, and support healthy communities.

“We are taking real action on climate change through renewable energy, fuel substitution, and energy efficiency retrofits for our territory’s industrial and commercial sectors,” McLeod stated. “The people of the Northwest Territories can be proud that their governments are creating the tools needed so that everyone can play a role in reducing pollution, improving energy efficiency, and creating good jobs for our Northern economy.”

NWT Industry, Tourism and Investment Minister Wally Schumann was also on hand for Friday’s announcement at the NWT Legislative Assembly.

“Today’s announcement supports the Government of the Northwest Territories’ long-term vision and approach to energy and climate change that will enable the NWT to transition to a strong, healthy economy that is less dependent on fossil fuels, Schumann stated. “We welcome the announcement and look forward to continued partnerships with the Government of Canada as we work to achieve our goals.”

Climate change is expected to be a critical issue in this fall’s federal election.