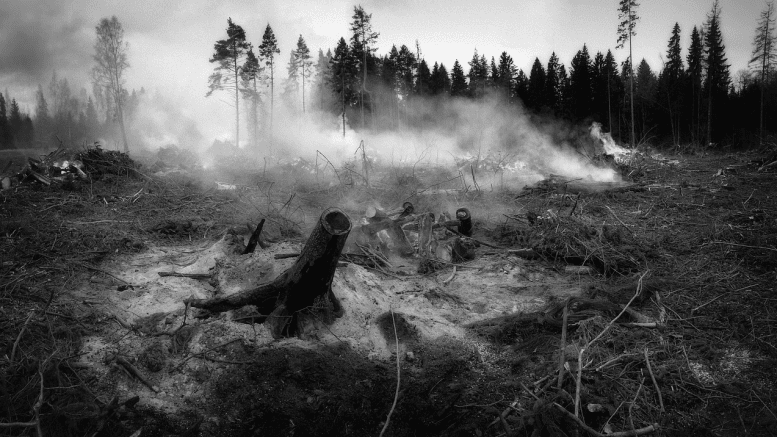 A stock image of a burn area. (Photo retrived from Pixibay.)

After being knocked unconscious by a falling tree, a firefighter said he continued to work until he felt too ill. After requesting medical attention he said he had to walk alone through thick bush to reach a helicopter.

The 20-year-old firefighter and his mother spoke with CKLB on the condition of anonymity, due to the risk to future employment opportunities.  The firefighter hopes to continue pursuing a career in firefighting.

The firefighter’s mother believes her son’s employer — the Department of Environment and Natural Resources (ENR) — wanted him to “shake it off and get back to work” because he seemed okay after being struck in the head.

“It’s not just a small thing that he went through, and it’s disappointing, just with the lack of care that he received from his employer,” she said.

Mike Westwick, a spokesperson for ENR, confirmed in an email “there was an incident involving a fire crew member.”

“Safety is always our number one priority in fire operations and we take the commitment to our employees very seriously. We have protocols in-place to support that commitment when injuries do occur on the job,” he wrote.

Westwick added, medical attention was provided swiftly after the information was received and care was arranged at the earliest possible time.

ENR is launching an investigation into the circumstances of the event.

The Workers’ Safety and Compensation Commission confirmed it is investigating the incident, but said no details would be provided.

The firefighter was part of a crew fighting wildfires in the Dehcho.

On June 11, he said he was about 75 kilometres outside of Fort Simpson, finding spots that were still burning underground.

“Then out of nowhere in the blink of an eye a big tree came and fell down, hit me square on my head and knocked me on my back,” the firefighter says.

He says he lost consciousness for an uncertain amount of time but believes it to be approximately one or two minutes.

After getting back up, he decided to return to work, but after about 15 minutes before he began feeling extremely disoriented and ill.

“I kind of just tried to play it off and I thought I was fine,” the firefighter said. “Then I just stopped and I was like ‘This is crazy,’ I couldn’t really function properly.”

The firefighter requested a helicopter to receive medical attention and had to walk about one kilometre alone to fly out.

“My feet were wet and I could barely walk at that point because I was so disoriented,” the firefighter said.

The firefighter says the helicopter did arrive quickly to pick him up.

Once in Fort Simpson he received medical treatment and was sent to a hotel to rest for the weekend, that’s when things took a turn for the worst.

Around 11 p.m. that night he began vomiting and was transported back to the Fort Simpson health centre.

The firefighter was told he needed to be medevaced to Yellowknife, but that weather was preventing any flights that night.

The firefighter’s mother grew emotional as she recounted the long hours of waiting for her son to be transported.

“I remember just being so worried, especially when he started throwing up, and there was concern that there was a potential brain bleed,” she said. “It was just such a scary time.”

The firefighter had to wait until 5:30 p.m. the following day, on June 12, to be flown to Yellowknife.

“The first thing I said to them was, ‘What took you guys so long to come get me?’ ” he said.

The firefighter’s mother feels as though her son should have been brought to Yellowknife immediately.

“We all know that the minimum time for a medevac in the Northwest Territories takes hours if you’re lucky. I don’t know who made the call just to bring him to Fort Simpson, but I’m wondering why the call wasn’t made to bring him directly to Yellowknife,” she said.

The Northwest Territories Health and Social Services Authority (NTHSSA) contracts air ambulance services. According to the NTHSSA, the provider has three aircrafts based in Yellowknife and one in Inuvik.

When asked about the delay in transporting the firefighter, Jack Miltenberger, communications coordinator for the NTHSSA, said in an email, “We cannot speak to any specific patient cases/services provided to ensure we protect patient privacy.”

However, they provided an explanation on general delays.

“If medevac resources (airplanes, crew) are not readily available, it is because they are already being used for transport of patients whose condition made critical care transport a necessity. In some cases, individuals may go by commercial flight if their condition is deemed stable enough for this type of transport.  Medevac flights may be impacted by weather conditions the same as a commercial flight may be,” they wrote.

The firefighter’s mother says no one from ENR has reached out to check in on her son since the incident.

For the firefighter, he is now recovering but hopes other young people pursuing a career in firefighting are aware of the danger of concussions.

“I just think it’s really important that more younger people learn, like the severity of how bad concussions can actually be,” he said.

“I still don’t think they get it,” she said, “the person who was responsible for [his] crew and for him and for his safety should have realized, this guy has been hit by a pretty big tree.”

CKLB asked ENR what its concussion protocol is for firefighters, but it was not provided.

Wildfire outside Norman Wells believed to be human caused


The fire is now under control