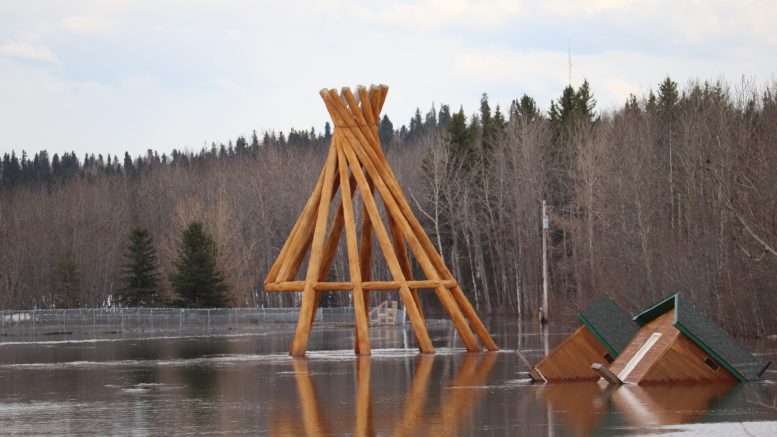 Flood victims in Fort Simpson feel the territorial governments response has been confusing and too slow. (Photo by Luke Carroll/ CKLB.)

Flood victims in Fort Simpson say frustration and dejection is mounting as three weeks have passed since the flood waters receded, and little has been done to repair the damage.

“You can’t see past the end of the tunnel, we don’t know where we’re going, it’s really hard,” says Pat Waugh, a 75-year-old flood victim from Fort Simpson.

She says the emotional toll from the traumatic experience has been building as the community members feel as they are getting few answers.

“First there was a flood and we were all evacuated, then we’re all working [hard], getting food and making sure that people in the community were okay, and everybody pitched in,” Waugh says. “But there was no visible sign of [Municipal and Community Affairs] or that government piece.”

Confusion around how the residents will be reimbursed from the damage has been adding to the misery many are feeling.

“I’m concerned that the way they’re rolling out that disaster assistance is going to be very [cheap],” says Mayor Sean Whelly. “I think there’s little regard for the real human cost here.”

“I’ve never been okay with their system, it’s more system-oriented, rather than people oriented,” he says of the territorial government’s response.

Whelly says tension is mounting around vulnerable residents being reimbursed for their evacuation.

“We’ve heard now that there’s some question about whether people’s claims for evacuation travel costs will be paid,” he said. “If that’s the way it’s going to be going forward, then make the rule clear. Tell everyone. And we’ll know that this is kind of an uncaring and unfeeling government.”

MACA held three public meetings on Thursday to explain to residents the process of applying for disaster assistance.

Chief Antoine says he’s happy this is happening, but it is very late.

“This should’ve happened right away,” he says.

Waugh was one of the people in attendance for the public meeting on Thursday — but she was unable to stay for the entirety.

“I started to cry and I had to leave,” she explains.

Waugh says everyone at the meeting was handed forms and told who they could contact. They were then told about the assessor who would be assessing every building and filing a report. She says the fact there was no timeline was the final straw for her.

CKLB reached out to MACA to better understand the policy.

The Disaster Assistance Policy document on the GNWT website says the territorial government may provide financial assistance to community governments, businesses and residents affected by a natural disaster.

But Jay Boast, a spokesperson with MACA, explained in an email, the GNWT doesn’t have the funds, it must go through the federal government for the money.

Earlier this week, Caroline Wawzonek, minister of Finance, said the territorial government set aside $5 million in response to the flooding. At the time, she said $3 million had already been spent on immediate response supplies. According to CBC, she said residents need to fill out a form for the disaster assistance policy to have the value of their belongings reimbursed, and acknowledged there was no money available to go immediately to flood victims.

CKLB spoke with MACA Minister Paulie Chinna on Tuesday, who said an assessor is currently investigating the level of damage in affected communities to put forward a claim to the federal government to receive the funding.

Whelly says the assessment has been far too slow and secretive. From what he had last heard on Wednesday only one assessor was expected to visit all the damaged buildings in the community.

“If you were to visit 60 buildings in two days,” Whelly says, “would you be able to visit each place?”

Chinna has been at the centre of the frustration as several community members feel she is not handling the situation appropriately.

While speaking with Chinna on Tuesday, CKLB asked if she could commit to all the displaced residents of Jean Marie River First Nation and Fort Simpson to be able to return to their homes before the upcoming winter. She did not commit to that.

“I think if she can’t make that commitment, she should probably… step down,” Whelly says. “I’m hearing a lot of excuses; the price of lumber is high, it’s hard to get contractors in… We haven’t even done anything yet for pete’s sake…. And already the excuses are coming.”

Muaz Hassan is the owner of the Unity Store and another flood victim.

He is calling on Minister Chinna to resign from her position as he does not believe she is capable of handling the response.

“I’m not expecting that Minister Chinna will have the capability of dealing with us — which is all the victims of this region — and I wish I’m wrong… But I think that we need someone who understands exactly what the job is,” Hassan says.

Minister Chinna did not respond to requests for comment in time for publication.

Hassan has also experienced flooding in Mozambique and other extreme disasters in several other countries, but he rated the GNWT’s response a 1/10.

He referenced the fact the community was received little support at the onset of the flooding, establishing a tent city at the top of the hill largely on their own.

Dennis Nelner is another flood victim from Fort Simpson.

“Whatever stimulus packages they have, let’s start using those things. Let’s start, you know, being proactive. I don’t see that,” he says.

He agrees with Hassan, things need to change going forward.

“When we have other members of the community calling for people to resign, or to be held accountable. I feel like I’m in the same boat, too. I have to share their thoughts,” he says.

Waugh is the owner of Kiwi Electric, a business that was flooded.

“I have to come home and look at 40 years of work underwater,” she says choking with emotion as she remembers the event.

After receiving little direction from government officials, Waugh and some volunteers took matters into her own hands.

“You’re not really getting any clear answers from anybody,”  she says, “so I finally just organized some volunteers and we cleaned it.”

“The business is operating limping along, because people need electricians, they have work,” Waugh says.

And just like Kiwi Electric, Waugh says the tight knit community will rebuild.

“We’ll continue to help each other because that’s what we always do,” she says.