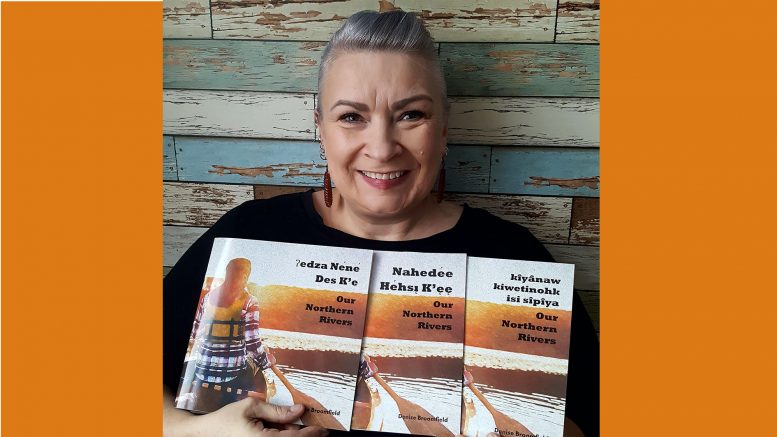 Inspired by all the North has to offer, Denise Broomfield decided to incorporate Dene culture and values into her first children’s book.

“I’m just so proud that I can take this book somewhere and say, this is your language,” she says.

Our Northern Rivers is about culture, learning and respect, she adds.

The book follows Broomfield on a canoe trip up the Nahanni river, where she reflects on the traditions, teachings and morals of the Dene.

The laws are reflected in the relationships shared between the main character and several northern animals.

“The Dene laws are universal,” says Broomfield, “and I want to help people.”

Her goal was in finding ways to bring these teachings to the children in her community.

By using the Dene laws as a guide, it can help also promote language, she says.

“You don’t have to be from somewhere to see how important language is to a region or culture.”

Broomfield is originally from Newfoundland and moved up to the North three years ago to be a teacher in the Dehcho region.

She understands her novel might be met with some hesitancy since she is not Indigenous, herself.

“I’m saying I am a friend. I know I’m not from here, but I respect who you are and I respect what you’re doing,” says Broomfield.

Boucher teaches Chipewyan to a classroom of roughly 30 students ranging from grades 7 to 12.

He says the book makes for a valuable resource.

Even though the book was written by a non-Indigenous person, Boucher says the book is a fair and balanced depiction of the Dene laws.

Boucher says the novel “brings out the same [teachings] that our elders have passed down.”

“We all have knowledge that is not for us to keep,” he says, “but to pass on.”

Our Northern Rivers will be going home with students for literacy week at the end of January.

This cost the SSDEC about $7,000, says the public affairs coordinator for the SSDEC.

Our Northern Rivers is available at the SSDEC regional office in Fort Smith and on the SSDEC’s First Nations Storybook app, available on both IOS and Android devices.


The Men’s Warrior Path to Wellness will be held from Nov. 29 to Dec. 5 at the Bannockland Inn.

MV Lafferty Ferry towed ashore after being stuck for days