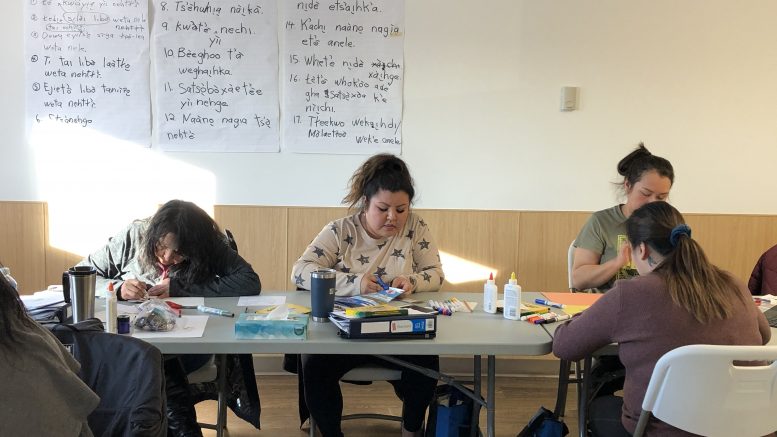 The Tłı̨chǫ Government hosted a 5 day Indigenous Language course in partnership with the University of Victoria. (Photo courtesy of Tyanna Steinwand.)

The Tłı̨chǫ Government held a five-day language revitalization course in Behchokǫ̀ in March, in partnership with the University of Victoria (UVic).

“At the end, many of them wanted to continue, they didn’t want the class to end,” says Tammy Steinwand-Deschambeault, the director of culture and lands protection for the Tłı̨chǫ Government.

She’s one of the organizers of the language classes and a graduate of the UVic’s Masters in Indigenous Language Revitalization.

Steinwand-Deschambeault says the recent course brought participants of all levels, but was predominantly for beginners.

The Tłı̨chǫ Government has been offering a series of courses that go towards the CILR.

“It’s important that organizations or Indigenous governments are able to offer these courses — that they reclaim, or take back their languages and provide these kinds of opportunities and experiences for their people,” she explains.

She says this course was particularly important as it gives parents the opportunity to learn or improve their Tłı̨chǫ.

“It’s important that as parents, we do our best to learn the language ourselves, and use the language that we do know,” she explains. “I made a sticker to promote language learning, and the sticker said ‘The best gift that we can give our children is the gift of language’.”

Mary Rose Blackduck, who works for CKLB Radio as the Tłı̨chǫ language announcer, participated in the course.

She says she took part in the course because language is her passion, additionally this was the first time she was able to gather for a language course.

“Since COVID, we haven’t had any language courses in the community, everything was online,” Blackduck explains. “And I like interacting with people.”

She says she loves working with Siemens and her favourite part of the course was being able to help young people learn.

Blackduck advises any new learners to spend time speaking with people who are fluent.

“Language is our connection to everything that’s out there, language is also very powerful,” she says. “People say it’s dying, it never dies and it never will, because it’s now been documented. So if you love it, just learn it.”

Steinwand-Deschambeault says by learning her language, she strengthens her identity, adding so much is lost when an interpreter is needed to speak with the Elders.

“By learning my language, I’m able to connect with my Elders,” she explains.

Steinwand-Deschambeault says involving Elders as instructors for language classes and on-the-land programs is also beneficial as it offers them a chance to share their expertise.

“For one thing, their health and wellness improves, they’re contributing,” she says.

Tania Muir, the director of cultural management programs with UVic, says in an email the university has been working with several NWT governments and organizations to offer CILR since 2009.

This includes the Government of the Northwest Territories, Aurora College and the Gwich’in Tribal Council.

Going forward, Steinwand-Deschambeault says her department is planning for another CILR language class that will be held on-the-land in April, although details are still being worked out.

Language revitalization across the NWT

Steinwand-Deschambeault says she is happy with the language revitalization being completed across the territory, but more can be done.

“Statistics show that Tłı̨chǫ is one of the strongest Indigenous languages in the Northwest Territories, that there are still many speakers,” she says, “but we don’t have as many youth as speakers as we did 40 or 50 years ago. So we’re quickly losing our language in our young people.”

On Tuesday she attended a meeting for the Mentor Apprentice Program (MAP) with the department of Education, Culture and Employment.

Steinwand-Deschambeault says the meeting brought together language speakers from across the NWT.

“It was so nice [at the meeting] when they were introducing themselves in all in their languages. It was beautiful,” she says.

MAP allows one-on-one instruction with a fluent speaker of the Indigenous language.

She says at one time people had to fight to have a language curriculum created, but things are changing.

“So there’s, there’s a lot of work that’s been put into it, we still have a long ways to go,” Steinwand-Deschambeault says, “but I feel hopeful with what’s what’s coming out… I’m looking forward to the next 15 to 20 years.”


‘Enough is enough’ says Jane Weyallon, president of the Native Women’s Association of the NWT.