Warning, this article contains graphic content of an alleged murder.

The final arguments to determine the fate of a Fort Liard woman accused of murdering her partner were delivered at the Yellowknife Courthouse on Wednesday.

Selena Lomen is facing a second-degree murder charge for stabbing her partner Danny Klondike in the chest with a knife on Oct. 28, 2018. She has pleaded guilty to manslaughter.

Lomen appeared in court by video from the Fort Smith Correctional Complex.

Crown Attorney Duane Praught acknowledged that Lomen and Klondike had a troubled relationship. A large part of the tension came from Lomen disapproving of Klondike’s drinking.

Praught said Klondike was a popular figure at the gathering.

“In many respects, Danny Klondike was the life of the party,” he said, arguing this made Lomen feel alienated.

This alienation was made worse when she arrived home in the early hours of Oct. 28, 2018 to find the door locked. She was forced to wake an intoxicated Klondike to let her in.

Praught said Lomen then entered the house, immediately grabbed the knife and stabbed her partner.

Praught brought in a knife into the courtroom to reenact the stabbing motion Lomen used to kill Klondike.

Lomen received a cut on her outside palm from the knife and blood was found on the handle, which Praught argues she used a reverse grip to stab Klondike.

“This is holding a knife with intent,” he said.

Shortly after the incident, Lomen admitted to Klondike’s family and the RCMP that she had stabbed him. But when questioned by police, she could not remember the details of events.

Peter Harte, Lomen’s attorney, argued this was the result of intoxication, whereas Praught said this was from the trauma.

Lomen’s level of intoxication was a major subject discussed at court, but eyewitness testimony was mixed.

After surrendering herself to the RCMP, Lomen wept and repeated the words “no” and “why?” which showed regret and remorse, Praught said. She also said she just wanted to be placed in jail, saying she didn’t deserve a lawyer. 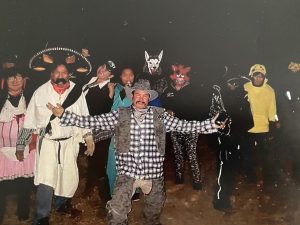 A photo of the party held hours before Danny Klondike was fatally stabbed by his partner Selena Lomen. This photo was entered into evidence. (Photo courtesy of the Yellowknife Courthouse.)

Harte argued that Klondike had a history of being violent towards Lomen while drinking.

He also accused him of being controlling, to the point Klondike put Lomen’s clothes in bags, which he kept in his sister’s truck so she was unable to leave town to live with her mother in Fort Nelson, B.C.

On the night of the incident, Lomen asked a friend to stay with her, which Harte argued was proof that Lomen felt unsafe.

Harte argued that as a result of this history, it is reasonable to believe Lomen used the knife to defend herself and not with the intent to kill her partner. Because the stabbing occurred near the front door, Harte argued Lomen may have been attempting to leave and Klondike was again trying to stop her. He says this likely resulted in a struggle that ended with the stabbing.

In response to Harte’s comments, Praught said this argument was speculation.

Justice Andrew Mahar will make his decision on April 23.