At least one staff member, the chief electoral officer, and now an MLA have issued complaints against Tim Mercer, the clerk of the Legislative Assembly.

Steve Norn is the latest person to publicly outline his concerns with Mercer.

Addressing reporters on Monday, Norn said the Legislative Assembly had “become infested with an ethical rot that is undermining the wellbeing of staff, elected officials and even our democracy.”

He continued to say the source of that rot was “the leadership of the Office of the Clerk.”

“When I and other colleagues have pushed back against the clerk’s undue influence over our responsibilities to this institution, he has responded with anger, demeaning language and, in one case, physical violence against a member of cabinet.”

Last year, NNSL reported a heated exchange between Mercer and Minister Shane Thompson where Mercer was said to slap Thompson’s hand away after pointing at him. Mercer denied there being a physical altercation.

Referring to other people that have brought forward allegations against Mercer, Norn said, “I stand with them and any others who have been hurt by this man.”

April Taylor works in the clerk’s office. On Feb. 11, she sent a letter outlining her complaint to the Board of Management. According to CBC, her letter reads, “Those of us who have dared to raise concerns or stand up for ourselves regarding Mr. Mercer’s management decisions have been kept silent through a corporate culture of intimidation, ostracization and fear.”

It added, “He has a bad temper that he is either unwilling or unable to keep in check in the workplace,” and called for his firing.

Taylor has since been suspended with pay while the board addressed the complaint.

According to NNSL, Nicole Latour, the NWT chief electoral officer, also wrote a letter to Speaker Frederick Blake Jr. and 15 other recipients on Feb. 12, which alleged repeated harassment.

Part of Latour’s frustrations comes from the Board of Management putting out calls to possibly find Latour’s replacement, as her term will expire on Mar. 31.

NNSL reported that Latour wrote to the Premier three weeks ago outlining her concerns, saying that “continued, targeted but deliberately muted, malfeasance stems not from the members on the Board of Management but from the clerk, Tim Mercer.”

The Board of Management issued a statement saying it “made a unanimous decision to seek expressions of interest for the position of Chief Electoral Officer. The Board rejects Ms. Latour’s suggestion that there was interference or improper considerations when reaching this decision. The Board routinely seeks expressions of interest for statutory officer positions,” and encourages Latour to re-apply to the position.

Mercer has also denied Latour’s allegations, saying that outside of a brief meeting last year, he has not spoken to Latour since the 2019 election.

The Board of Management oversees the administration of the Legislative Assembly. It is led by Speaker Frederick Blake Jr. — also Mercer’s supervisor — and four other MLAs. Mercer is also the board’s secretary.

Following Norn’s media conference, the board, which has already received two other complaints in less than a week about Mercer, released a statement.

It said Norn first raised his concerns on Dec. 11. This was after Norn accused Mercer of using disparaging language against a constituent after she applied to be the territory’s languages commissioner and suggested she had been refused because she was Indigenous, according to CBC.

The board then recommended mediation between the two men. Three sessions happened in January, after which the appointed mediator told Blake that mediation was unsuccessful.

“The Board is determining what next steps to take in regards to all of these matters,” reads the statement.

Norn said he’s met three times with the board, including twice last week, and “nothing has changed or has been done.”

During the news conference, Norn said he’s now called for Mercer’s resignation and an investigation into the clerk’s conduct.

Mercer told CKLB he was willing to undergo an independent investigation.

“It’s the only way to properly deal with these issues,” he said. 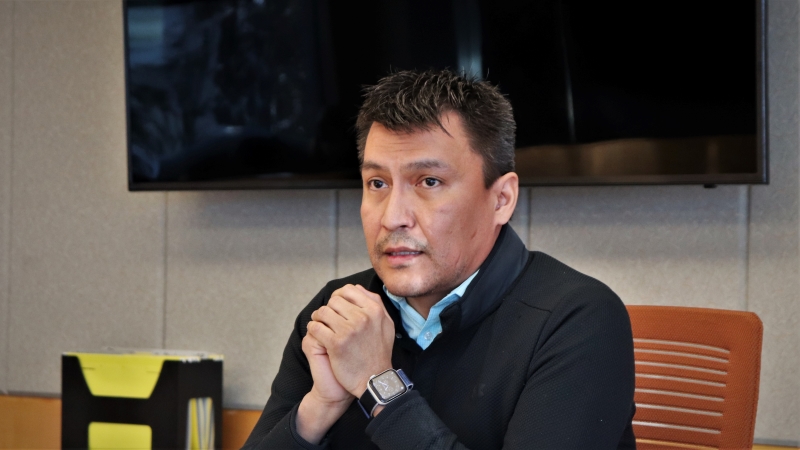 So far, Mercer’s response to media has been to dismiss the allegation as coming from “disgruntled” employees.

He told CBC, “There is an uncivil war at play within the current Legislative Assembly, the likes of which I have not witnessed in the previous five Assemblies I have served.” He added that the war was “fuelled” by “former and failed” Yellowknife politicians that did not accept the results of the 2019 election.

He also told Cabin Radio the complaints were a “coordinated attack” and that he would respond in a professional setting “rather than a public shaming or media circus.”

CKLB asked via email Mercer why a staff member, the electoral officer and an MLA would come together to file complaints against him.

Whether the Board of Management will order an investigation remains to be seen, but it would not be the first time Mercer’s conduct is investigated.

In 2018, two investigations from southern law firms resulted in dismissing the complaints against him.

CKLB also asked Mercer if having several allegations, years apart, pointed to issues with his behaviour.

The clerk can only be removed if a majority of MLAs vote to do so following the recommendation of the Board of Management.


The Board of Management decided on an assessment of the "culture and atmosphere for the entire office" rather than an investigation into Clerk Tim Mercer.

Trappers affected by Taltson flood eligible for up to $40,000


"I want to let you know that trap season, for a lot of my constituents, is a wash," says MLA Steve Norn.