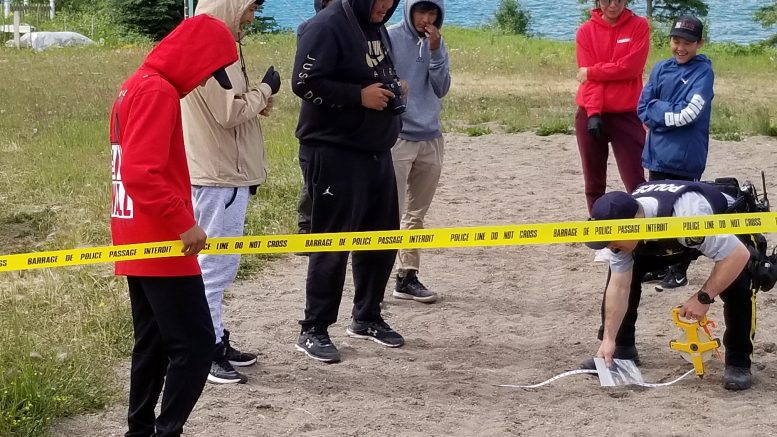 The staged crime scene investigation held for youth in Whatì. (Photo courtesy of the RCMP)

Investigating crime scenes and learning how to make a safe arrest were some of the many activities Whatì youth participated in last week.

This came as part of a camp organized by the Whatì RCMP from July 6-8, providing an opportunity for eight youth to see what a career in law enforcement looks like, a press release says.

The event included a staged homicide, where attendees investigated a crime scene.

The youth were tasked with handling evidence, interviewing witnesses and using the police dog.

“When people think crime scene investigation, they often think of the TV show,” says Cst. Carman Dutz, in the release, “we wanted to simulate an investigation that would illustrate collaboration with several units in the RCMP.”

For the second and third day, youth replicated an impaired driving investigation, the release says.

This involved identifying indicators of impairment, how to make a safe arrest, reading the suspect’s rights and breath demand.

There was also a fitness test with an obstacle course, an Elder presentation as well as conversations about the RCMP’s core values, the release says.

The event comes during a time where the role of police is being questioned, after several unarmed Black and Indigenous people were killed at the hands of the police.

Protests against racism and police misconduct spread across the world, with demonstrations even held in Hay River, Fort Smith, Fort Simpson, Inuvik and Yellowknife.

The event  — which has been in the works since mid-May — provides an opportunity for the RCMP to recruit northerners to join the force, says Julie Plourde, RCMP spokesperson.

Several of the attendees “could be exceptional Mounties” Dutz finishes.