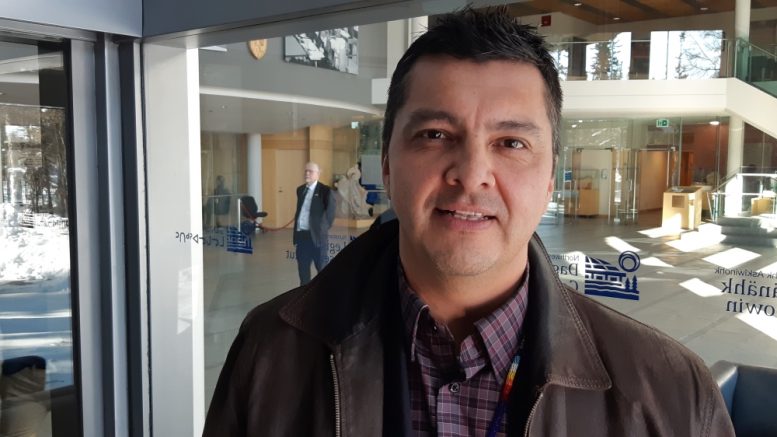 Monfwi MLA Jackson Lafferty refused to apologize to the premier for alleging she broke the law in firing the former president of Aurora College. He was then asked to leave the Legislative Assembly. (Francis Tessier-Burns/CKLB).

“For speaking the truth, I will not apologize.”

That is what Monfwi MLA Jackson Lafferty said when he was told to apologize to Premier Caroline Cochrane.

Speaker Frederick Blake Jr. then kicked out Lafferty for the rest of the day’s sitting.

(Brief background: Dr. Tom Weegar held a double role as both the college president and associate deputy minister of post-secondary renewal. The premier has maintained that she was well within her rights to fire Weegar since he held this other position. Lafferty and Cochrane have effectively been talking past one another as each focuses on one of Weegar’s roles.)

Delay due to language rights

Lafferty instead brought up a point of privilege on Tuesday since no Tłı̨chǫ interpreters were available. He said his right to speak his Tłı̨chǫ language was infringed upon and asked to close down the house.

After Speaker Blake took it under advisement, Lafferty stepped out for the rest of the on Tuesday.

Blake dealt with the language point of privilege first thing on Wednesday. Several MLAs rose in support of Lafferty’s right to speak Tłı̨chǫ in the House.

Ultimately, a motion came forward to refer the issue to the Standing Committee on Rules and Procedures for further discussion.

CKLB asked committee chair Kevin O’Reilly if future sittings could be cancelled due to a lack of interpreters. He said he didn’t want to get ahead of himself and the committee would look at the issue and likely bring forward recommendations in the future.

‘Still a lot of questions’

Following the motion, Blake again ordered Lafferty to apologize to the premier.

With Tłı̨chǫ interpreters now present, Lafferty said he never intended to “scandalize this house” but refused to apologize.

“I’m sorry that (my words) caused my fellow MLA discomfort,” he said. “Truth and integrity are (more) important however than hurt feelings.”

Lafferty spoke with CKLB as he was leaving the Legislative Assembly.

He said many residents were supporting him in “holding the government accountable.”

Pressed on who exactly was calling for him to dig into this issue, Lafferty said it’s “not just my constituents, people across the North.” And added, “Not everybody of course, but quite few have been in touch with me since this whole thing started.”

He then called on the premier and cabinet to show exactly why Dr. Weegar was fired.

Lafferty said it would be “business as usual” when he would return to the House on Thursday.

It’s unclear whether the Speaker will ask him to apologize again.

Under the rules of the Legislative Assembly, a motion could be brought forward to suspend Lafferty for longer than a day if he continues to defy the Speaker’s orders.