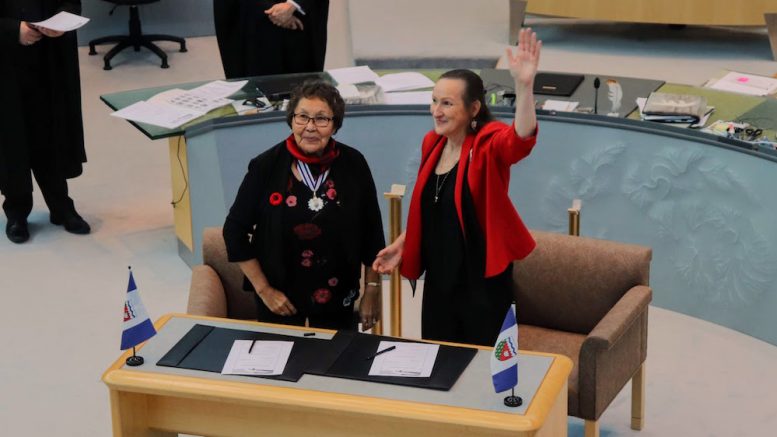 Unlike the last assembly, the new government’s list of priorities fits on a single page.

While they are not presented in a particular order, the top priority reads, “Settle and implement treaty, land, resources and self-government agreements.”

The second calls for the implementation of the United Nations Declaration on the Rights of Indigenous Peoples.

If you’re asking yourself what that means exactly then your guess is as good as everyone else’s.

In an interview with CKLB prior to becoming Premier, Caroline Cochrane said the previous government made a mistake by developing about 230 mandate commitments.

According to its own count, 28 of those were left either “in progress” or “unfulfilled” before the new government took over.

The 19th assembly seems to have adopted the opposite approach and kept its priorities as broad as possible.

For example, the next two points on the list have to do with children: “Improve early childhood development indicators for all children,” and “Advance universal child care by increasing availability and affordability.”

Several candidates ran on introducing a subsidized child care program in the territory; the current wording allows the government to simply “advance” rather than introduce such a program.

The list goes on with more vague commitments and no measurable actions, save for this: “Increase the number of resident health care professionals by at least 20 per cent.” But where those professionals will be remains to be seen.

The list only mentions climate change a couple of times. It calls for the GNWT to “strengthen (its) leadership and authority on climate change,” as well as ensure climate change is taken into account when making decisions.

Again the question of “How?” comes to mind. Granted, Cochrane mentioned possibly creating a climate change cabinet made up of ministers, regular MLAs and Indigenous leaders in her bid for Premier.

It’s worth mentioning the previous government started by doing something similar in only having 25 priorities, which then ballooned to the 230-plus commitments.

The MLAs most responsible for following through on the priorities are those sitting in cabinet, leading the various departments. 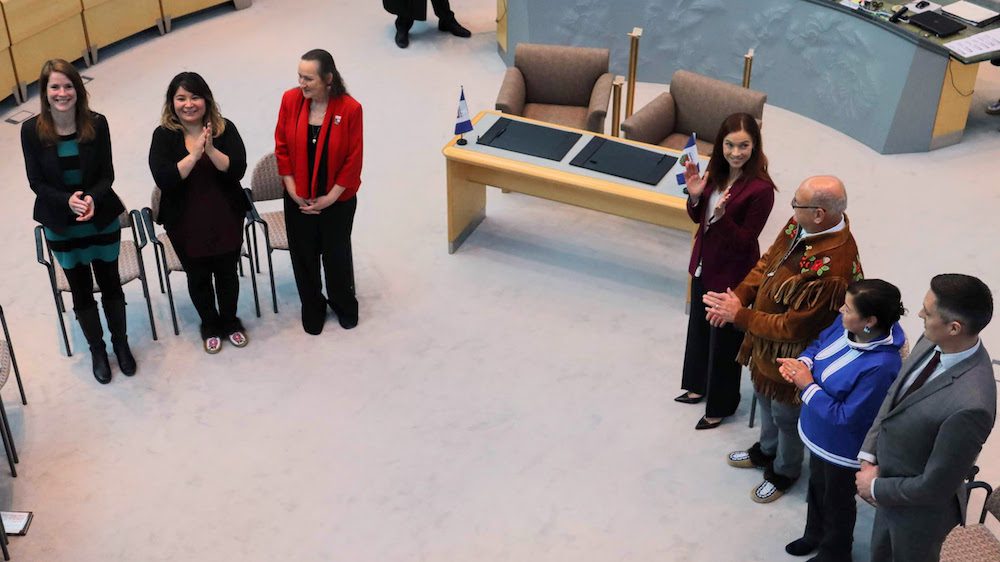 All seven members of cabinet were sworn in to their new roles on Friday, October 25. (Francis Tessier-Burns/CKLB).

In an interview with CKLB, Cochrane said the new cabinet had its first meeting on Friday but that it was still too early to assign departments.

“The biggest thing for me,” she said, “is making sure that every single minister understands that whenever possible that the decisions they’re making is coming from the bottom up, from the people that we are serving.”

Prior to being appointed to cabinet, Simpson told CKLB he was interested in taking over the Department of Finance so he could bring in accountability changes.

During his Premier candidate speech, Simpson deplored the way the previous government functioned on a cabinet-plus-three method, meaning the cabinet constantly voted as a single block and the same three regular MLAs sided with it to pass legislation.

Premier Cochrane acknowledged cabinet solidarity was important but she wants to develop a tiered system where ministers will be allowed to vote their conscious on certain matters.

Much like its priorities, how that system will play out remains to be seen.

The full 22 priorities for the 19th Legislative Assembly can be found here.