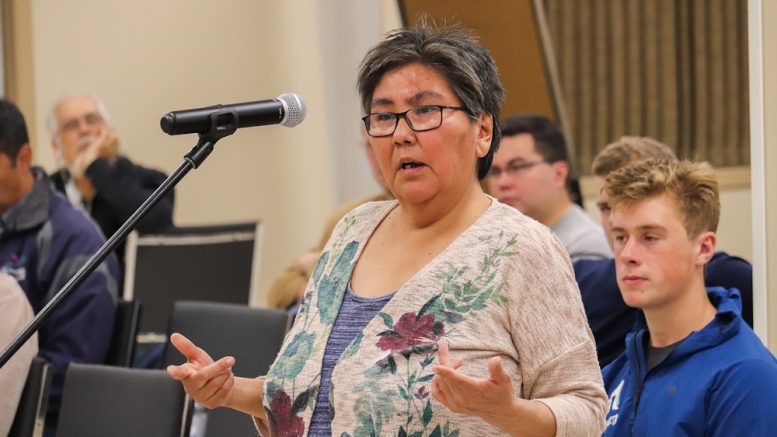 Julie Thrasher wanted to know what the candidates would do improve the foster care system in the NWT. (Francis Tessier-Burns/CKLB).

As in the first forum, the themes of the evening were land, language and culture.

Moderator Dëneze Nakehk’o kicked things off by asking candidates how they reached out to their Indigenous constituents.

Dave Ramsay was the first to answer. He touched briefly on his interaction with Indigenous residents, saying those he’s spoken to are mostly concerned with the future. “It’s jobs, it’s the economy that’s really front of mind for most people in the riding.” But he focused on his experience as a consultant with various Indigenous groups in the territory and having the “door slammed in our face” by government.

His opponent in Frame Lake, Kevin O’Reilly acknowledged that the riding includes Lanky Court and Sissons Court, which are mostly public housing units. “There’s a lot of Indigenous people in those areas and… I’ll talk with them at the door on issues around housing, income support,” he said, and added he helped constituents understand how they can vote.

Over in Yellowknife Centre, incumbent Julie Green said she saw different Indigenous groups leading a “grassroots movement” to connect with their culture through gatherings and feasts. Green said she didn’t see a leadership role for herself in making those connections but supported them by offering funding as an MLA.

Much like Ramsay, Thom Jarvis focused on his work life as business development officer with the Métis-Dene Development Fund to bolster his relationship with Indigenous people in the territory. Helping found local businesses, he said, helps develop the economy in the communities and gives kids “a different sort of role model” where they can build their own business.

Arlene Hache drew on her personal experience of coming to Yellowknife as an 18-year-old and being homeless to forge relationships with community members. “My relationships are like family and I know people all across the Northwest Territories, Nunavut,” she said. “They’re all different and … I’ve learned a lot off them.”

Niels Konge focused on his time as Yellowknife city councillor and the city hiring an Indigenous coordinator to be “a good neighbour.” He added the the GNWT is lagging behind in reconciliation.

Caroline Cochrane referred to her Métis heritage and said working with Indigenous populations is critical. She said the Range Lake riding is made up of 25 per cent Indigenous people, and that they are disproportionately represented in the lower income apartments. “I’ve spent time at those doors and will continue to spend time because those are the people that access the most services.”

Finally, Hughie Graham also said he went door-to-door to meet Indigenous constituents and heard concerns about corrections, education and land claims. He said an important step would be to to partner with Indigenous governments to “attack the root cause of the problems that are out there.” One of the defining points of the evening was Julie Thrasher wanting to discuss something that hadn’t yet been brought up at either forum: child and family services.

Graham said the GNWT has to increase its capacity to get northerners on the frontlines of the foster care system. He disagreed with the decision to cut funding for the social worker program at Aurora College from a couple of years ago and would want to bring that back.

O’Reilly agreed that cutting the program was a bad idea, and took more of a preventative approach to the foster system problem. He referred to his lobbying for more funding for midwifery services to help support new families in their communities. He also said the territory needed to have its own child and youth advocate to address system problems.

Ramsay agreed on needing a territorial advocate. He said the GNWT had to approach these kinds of policy changes with a “lens to bring equity and not impose western values on things.” He also criticized the government for leaving reports sitting on a shelf with no changes.

Green pointed to government investing in 21 new positions and said it should better support Indigenous parents looking to become foster parents. She also clarified that most child apprehensions were not due to abuse but rather neglect, meaning that the parents didn’t have the proper supports to take care of their kids.

Jarvis echoed the point that keeping children in their community was the ultimate goal, but that wasn’t enough without enhanced screening, including family members to prevent “disasters.” He agreed with Graham that the government needed to increase capacity of northerners on the frontlines.

Hache immediately contradicted that point. “Northerners know how to take care of their children,” she said. “They are not permitted to take care of their children, and I have watched that genocide for 30 years in the Northwest Territories. People at this table fed into that by not providing appropriate legal services, by hiring more and more child welfare workers whose mentality says these people have problems and we have to take their children.” She then spoke of her successes running a family reunification program. Her comments garnered applause from the audience.

Konge drew on his experience as being a foster parent, saying there were many things that can be improved. He said the government needs to address underlying problems of neglect if that’s the case. He added that he’d heard from an Indigenous woman that residential school took away her ability to love and pass that on to her children. He said the government needs to support people in re-learning how to be parents.

Finally, Cochrane referred to her time working with Hache as part of the family reunification program. Ultimately, though, she said an Indigenous minister in charge of the department of health and social services, “and preferably a woman,” is what it’s going to take to bring about change in the foster care system.

You can hear the candidates answer below:

Following the forum, Thrasher told CKLB that she’d heard the candidate answers too many times before, and it would take more to really change the foster care system.

The last Dene Nahjo election forum will be this evening, again at the Tree of Peace friendship centre, at 6:30 p.m. This last one will feature candidates from Yellowknife South and Kam Lake.