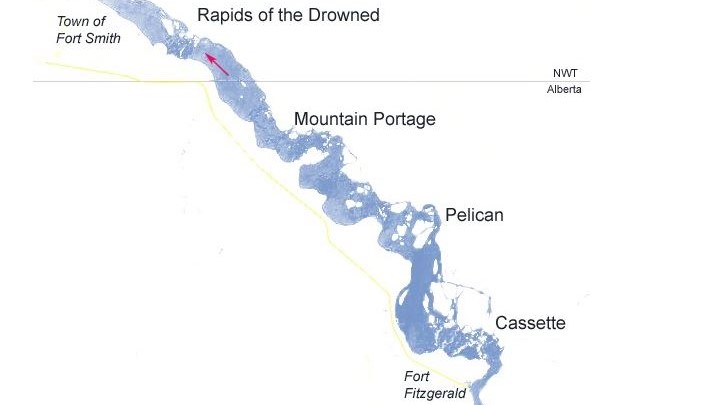 A 26-year-old canoeist is fortunate to be alive after he fell into rapids on a frigid Slave River on Thanksgiving Monday, just  south of Fort Smith on the Alberta side of the border with the Northwest Territories.

RCMP say the man had put the canoe in the river Monday afternoon near Fort Fitzgerald, Alta.,  and was reportedly getting ready to portage around the Cassette Rapids when his canoe slipped back into the water.

He apparently tried to retrieve it and got swept up by the rapids.

He reportedly was not wearing a life jacket or a dry suit.

Calls for help went out to emergency officials as well as an appeal for paddlers on the Fort Smith Community Facebook page.

The man was located in the early evening, about two hours after he went into the water, on an island in the middle of the rapids.

Neither RCMP from Fort Smith or the fire department were able to get to him.

That’s when civilians made their way by boat to the island and brought the man to shore.

He was then taken to the Fort Smith health centre where he may have received treatment for non-life threatening hypothermia.

His name has not been released and it’s not known at this point where he is from.

It’s also not clear what kind of boat the rescuers used to reach the man.

The names of the heroes have also not been made public.

A call had gone out to a military base in Alberta for a helicopter and it was reportedly still hours away when the man was rescued.

Fort Smith Mayor Lynn Napier says she’s relieved that tragedy was averted and the story has a happy ending.

“It is October. I think it got down to -2 last night. The Slave River is a very powerful river. Anybody who is planning to go out in a canoe or kayak should be very experienced,” Napier said. “If you are going out, let somebody know. Be prepared. Have the gear and the clothing you need. If you have something that goes into the water…it may be better to leave it and retrieve it down river rather than go in and get it yourself.”

Because the incident happened in Alberta, RCMP media relations in Grande Prairie, several hours away,  took the call Tuesday from CKLB.

They agreed, officers could have tried to get the names of the rescuers and provide them to the media in case they were recommended for official recognition at a later date.

The Fort Smith Facebook page states that its post played a role in alerting paddlers and helping the man be rescued.

Two arrested in connection to May shooting