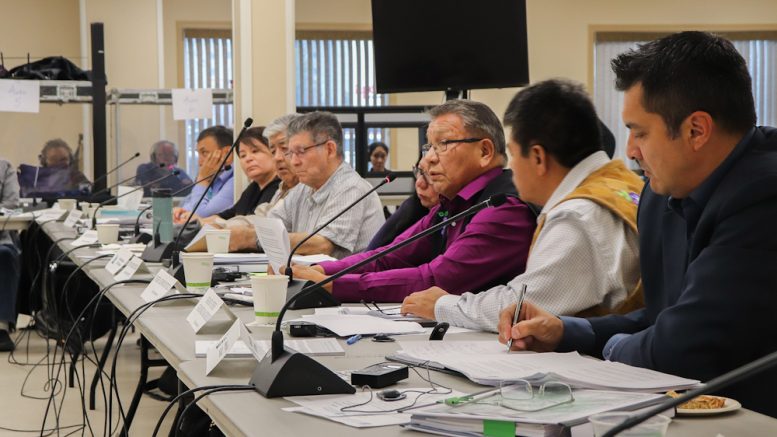 More than a dozen Indigenous leaders took part in the meeting. (Francis Tessier-Burns/CKLB).

And they’re only some of the concerns more than a dozen Indigenous leaders from across the territory told MLAs at a public meeting at the Tree of Peace Friendship Centre in Yellowknife.

The gathering wasn’t so much of a discussion as an airing out of ongoing grievances the Indigenous leaders felt against the Government of the Northwest Territories.

Duane Smith is the chair of the Inuvialuit Regional Corporation, and he put it plainly: “This assembly has a lots of work to do to rebuild trust.”

Smith drew on the IRC’s experience and said it’s been “butting heads” with the government for over 35 years in trying to implement its land claim.

He said public servants needed to better understand the agreements between the government and the different Indigenous groups. (The IRC has taken steps to make that easier by launching IFA-101 to help educate public servants on the Inuvialuit Final Agreement.)

“It’s important moving forward, for us, to give everybody equal attention around the Northwest Territories… not just lip service,” he said.

Of course, First Nations in his riding are working to settle their own land claim as part of the larger Dehcho process. Dehcho Grand Chief Gladys Norwegian brought up the stalled negotiations with the MLAs at the meeting, and called on both the GNWT and Government of Canada to return to the negotiation table in good faith.

“In our framework agreement in 2001, GNWT was to be at the table as observers. Any discussions or talk on treaty should be from nation-to-nation, so meaning from us to Canada. We see GNWT as a junior branch to the federal government. In saying that, things have changed and if GNWT are going to be full participants, they really do need to do their homework and have a paradigm shift, and treat us like nation-to-nation rather than a level below them.”

His message to the MLAs was to listen to communities for the “real story” and the “real issues” in the territory. He said both the MLAs and Indigenous leaders need to work together and hold each other accountable.

“If we work together on our issues, we’ll do fine,” he said. “If we just sit and talk about it today and go home and start dealing with our own issues, we’ll be right back to the table again with the same issues.”

That’s essentially what happened all throughout the 18th Legislative Assembly, as was acknowledged by returning MLA and Minister Caroline Cochrane.

“The issues are the same,” she said. “One of the mistakes, in my opinion, the last government made was to have 230 mandates. Let’s pick a few and do it right, and let’s not do it alone.”

Cochrane, who is also running for Premier, added that her main takeaway from the meeting was to meet more with Indigenous leaders to rebuild relationships, and that those meetings not be so rigid.

Housing, culture, language, lack of funding, none of these topics are surprises.

Many of these issues came up again a day later during the Premier selection process.

Since the election, MLAs have been saying they want fewer priorities and to make them achievable.

Now faced with a slew of issues from Indigenous leaders, it remains to be seen how closely the government’s priorities will align with that they heard.

Those priorities will be made public during the 19th Legislative Assembly’s first session on October 25.

Joe Dragon ‘relieved of duties’ as deputy minister of infrastructure

Should vaccines be mandatory for GNWT employees?