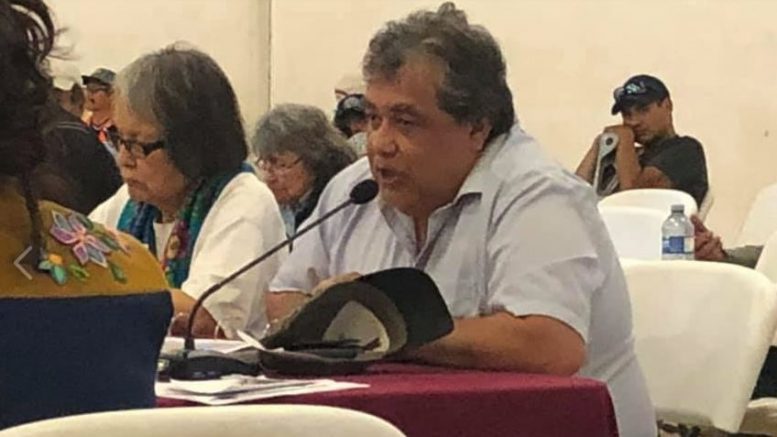 Dennis Nelner, a 54-year-old man from Fort Simpson, has confirmed for CKLB that he is the victim of a shooting by an Environment and Natural Resources officer in that Dehcho community on Friday night.

Nelner was taken to Stanton Territorial Hospital in Yellowknife, reportedly by Medevac.

A photo of him released Monday shows Nelner on crutches.

He wasn’t able to elaborate as he was having his bandage changed at home when contacted by CKLB Monday afternoon.

Meanwhile, the actions of the ENR officer are under investigation after he hit Nelner while trying to shoot an aggressive bear.

Nelner’s injury is non-life threatening, according to RCMP who continue to investigate the incident.

“The ENR Officer discharged his firearm in response to the bear’s aggressive behaviour,” RCMP stated in a news release issued Saturday. “Shortly thereafter, a man reported he had been injured as a result of the discharge.”

Nelner reportedly says he was hit in the thigh while he was inside his home and that he heard several shots.

ENR issued a statement in the form of an email to CKLB Monday afternoon.

“ENR received reports of a bear in the middle of town at approximately 7:30 p.m. on Friday, September 20, 2019. As reported by the RCMP, the officer discharged his firearm in response to the bear’s aggressive behaviour. Shortly thereafter, a man reported he had been injured as a result of the discharge. The bear was humanely destroyed later that evening by the RCMP,” stated ENR spokespersaon Joslyn Oosenbrug “As this incident is under investigation by the RCMP, we cannot provide any further details. ENR is conducting a separate internal investigation to determine whether the officer followed appropriate policies and procedures. A wildlife pathologist with the University Calgary is arriving today to assist with the necropsy of the bear.”

She added that public safety is always the main priority for ENR when responding to problem wildlife or wildlife-human conflicts.

Under the Wildlife Act, a problem bear may be destroyed if it endangers public safety or property, or if it is wounded or diseased, Oosenbrug stated.

She added that ENR’s standard operating procedure dictates that lethal removal activities should be conducted away from the public where possible.

However, in any incident where imminent threat to public health or safety exists, any appropriate and necessary action may be applied Oosenbrug states.