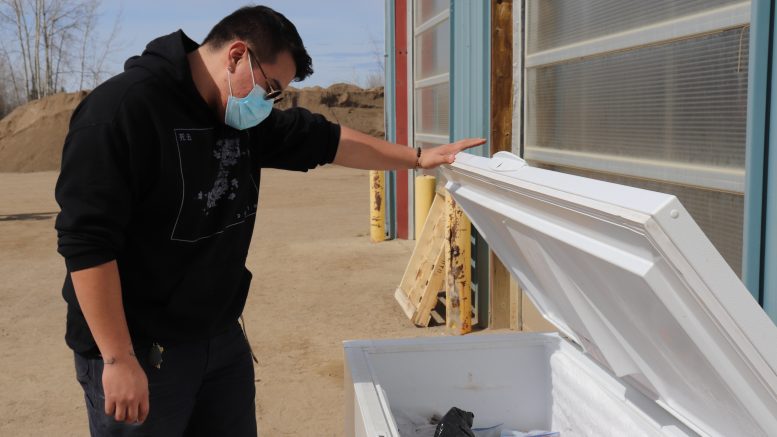 Tim Gargan-Lacasse is one of the volunteers on the emergency team. (Photo by Luke Carroll/ CKLB.)

Many Fort Simpson residents who live on the hill have been doing all they can to take care of their neighbours from the island.

This includes sheltering those displaced, as well as volunteering with the emergency team that set up shop at the public works building.

Here, they efficiently distribute everything from milk and bacon, to tents and sleeping bags to the more than 700 displaced residents.

As the days stretch on and waters continue to rise — on Friday, officials reported the Mackenzie River breaking up and water levels reaching 16 meters — these items become more and more crucial.

The workers and volunteers are  efficient, guiding one person per family through the building to gather supplies.

Tim Gargan-Lacasse is one of those helping with distribution.

“Essentially I’m just guarding the freezers,” he explains. “It’s just to make sure everyone gets an even distribution of everything.”

He says some families alleged others were taking more than their fair share. Rumours like that reflect the darkening mood as the situation stretches on longer than many expected. 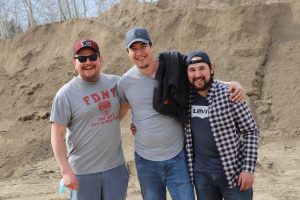 Gordon Thompson (left), Alex Roche (right) were some of the volunteers with the emergency team. (Luke Carroll/ CKLB.)

“You can kind of feel it, like a sense of fear and urgency,” he says.

The days are long, but the generosity Fort Simpson is receiving from across the North has been a bright spot for many community members.

KFC was even flown in, but Gargan-LaCasse was not one the lucky ones to get a piece.

“I don’t really care as long as everyone is fed and stuff… But I would be lying to say I didn’t want KFC,” he says with a laugh.

The big takeaway for Gargan-Lacasse is how quick things can change.

“The daily amenities that you take for granted, all gone like that,” he says, snapping his fingers for emphasis.

A bit longer than expected

“I would like to thank all the people on the Emergency Team,” said Łı́ı́dlı̨́ı̨́ Kų́ę́ First Nation Chief Gerald Antoine.

Alex Roche had just arrived to volunteer Wednesday afternoon, explaining he felt it was important to help his community members.

“We’re kind of living luxuriously up there on the hill,” he says. “I believe this is the right thing to do.”

“We’ve realized that we’re in it for a bit longer than anticipated and we want to help… We can’t just wait for the ice anymore,” she says. “I think that’s why all of us are here, just to help in any way we can.”

Despite being there to help, the pair made sure to recognize countless people for their contributions. 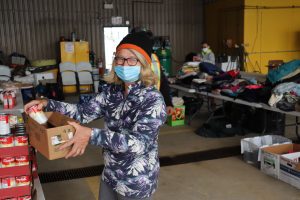 Deborah Stipdonk was one of the volunteers with the emergency team. (Luke Carroll/ CKLB.)

Gordon Thompson was helping set up a water tank at the community playground, but he also made sure to thank others.

“I ended up dropping off a bunch of spaghetti noodles for Celine Antoine, she’s making a lot of food for all the volunteers, big shoutout to her,” he says.

But not everyone volunteering lives on the hill, Deborah Stipdonk’s home is on the banks, she now says she’s in a camper at the top of the hill.

She adds the residents of Fort Simpson are sticking together despite the circumstances.

“This community is amazing.”

One person dead in excavator accident in Fort Simpson