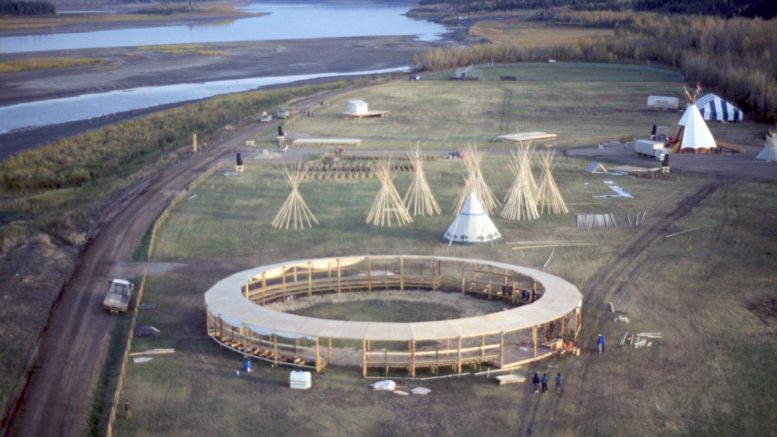 Monday is travel day for members of the Dehcho First Nations. Youth from Wrigley, SambaaKe, Deh Gah Gotie and Liidlii Kue paddled to Fort Simpson this weekend from Fort Providence.

Savvy Norwegian who works with the Liidlii Kue First Nation, this year’s host community shared this video capturing the moment the Dehcho youth arrived last Friday for the traditional gathering which was hosted for folks hoping to arrive ahead of the Assembly. It was a moment reminiscent of the past, when Dene for centuries met at this historic meeting place, where the Liard and Mackenzie Rivers meet. An area that is also sacred and blessed by Saint Pope John Paul II.

“Our theme is, ‘Treaties don’t make nations, nations make treaties.’ It is sometimes believed the treaties are the source of our nationhood –not the case. We have been a self-governing people since the beginning of human history on this land. It is Canada who relies in treaties for political legitimacy not us.”

The Dehcho First Nations currently consists of 7 Dene First Nations and 2 Metis Councils. Treaty 11 will be a main discussion point, as well as the latest on the Dehcho land claim and self-government negotiations.

The Assembly will run from Tuesday till Thursday. Elders met yesterday ahead of the Assembly at the Rec Centre in Downtown Fort Simpson. Some are hopeful to see some communities come back to the Dehcho First Nations, that have left over the past two years such as the community of Nahanni Butte, which shares traditional trails and has family ties with SambaaKe’, Acho Dene Koe, and Jean Marie First Nation. 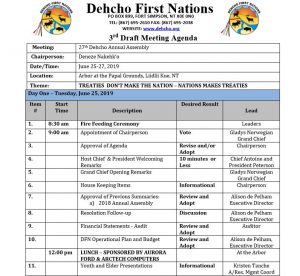 
The Men’s Warrior Path to Wellness will be held from Nov. 29 to Dec. 5 at the Bannockland Inn.