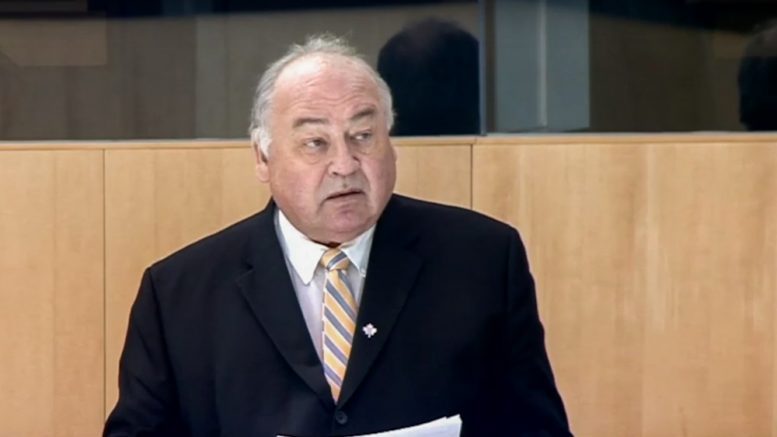 What do the premiers of Alberta, Ontario, Saskatchewan and New Brunswick have in common? They’re all opposed to the federal plan to price carbon emissions.

They’re also the only provinces part of a special meeting with NWT Premier Bob McLeod taking place today in Calgary.

Trista Haugland is communications coordinator for the premier’s office. She told CKLB he was invited by Premier Kenney to attend the meeting but as of Wednesday of last week there wasn’t a specific agenda.

“However, it is likely that they will discuss many of the items that will be discussed at the COF (Council of the Federation) meeting next week,” she wrote in an email.

The Council of the Federation is a meeting of all of Canada’s territorial and provincial premiers. It is being held in Saskatoon starting tomorrow until Thursday.

CKLB asked if that was the case then why the need to have an earlier meeting, and if Premier McLeod was working on any specific projects or positions with the other premiers listed above.

We were directed to call into a press conference happening later on Monday, July 8.

The other thing all of these premiers have in common? They all signed a letter in June saying the country’s “national unity” was threatened due to two federal bills: C-69 and C-48.

Bill C-69 would change how infrastructure projects are evaluated to focus more on human health, the environment and effects on local communities. It also scraps the National Energy Board and replaces it with the Impact Assessment Agency of Canada.

Critics say the legislation would hamper pipelines and similar energy projects from getting oil to international markets. The federal government says it’s focused on streamlining the assessment process and focus more on community impacts.

C-48, the Oil Tanker Moratorium Act,  would, as the name suggests, prevent marine transportation of oil along BC’s north coast. As explained by Global News’ David Akin, the bill “would turn into law into what has been practised for years.”

It isn’t clear if Premier Bob McLeod signed the letter after speaking with cabinet. But, according to MLA Kevin O’Reilly, regular members were never consulted.

The signing also surprised McLeod’s brother and Liberal MP Michael McLeod who voted in favour of both bills. The younger McLeod took issue with the letter, saying it didn’t address Indigenous issues.

What the premier intends to gain from aligning himself with the provinces fighting the carbon tax remains to be seen.

Two court challenges, one in Saskatchewan and the other in Ontario, have already been quashed by local courts who have decided the legislation is within the federal jurisdiction. Nonetheless, the decisions haven’t deterred Manitoba from following through with its court challenge. The Supreme Court of Canada also announced it would hear Saskatchewan’s challenge in December.

As for the NWT, the carbon tax hasn’t even come into effect yet. It was supposed to happen last Monday on Canada Day but has been delayed until September 1. Though that’s due more to government’s own poor planning  than any successful lobbying campaign.