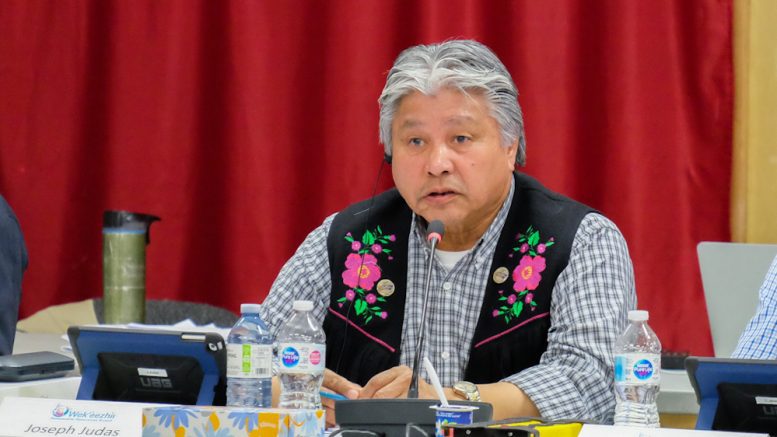 Joseph Judas is the chair of the Wek’èezhìı Renewable Resources Board. The board hosted a public hearing for the Bluenose-East caribou herd in April. (Francis Tessier-Burns/CKLB).

According to Indigenous and scientific evidence “a serious conservation concern exists for the Sahtì ekwǫ̀ (Bluenose-East) caribou.”

This is one of the conclusions outlined in the Wek’èezhìı Renewable Resources Board’s ruling on the herd’s joint management plan submitted by the Tłı̨chǫ Government and Department of Environment and Natural Resources.

The plan originally proposed dropping the total allowable harvest for the herd from 750 to 300 bulls. The board decided that wasn’t low enough and ruled that only 193 bulls a year will be harvested within the Wek’èezhìı boundary for the 2019/2020 and 2020/2021 seasons.

A large part of the proposed management plan was upping the price for wolf pelts. Under the ENR program, a carcass gets $900, and up to $1,650 for a prepared pelt. The plan pushed this kind of incentive despite there being minimal proof this helps slow the decline of caribou.

This was noted by the board which recommended ENR report on the effectiveness of the program. It also said the department should monitor wolverine populations.

Habitat degradation was another major concern. The board said the governments should establish “legal protection measures” to ensure the sustainability of Sahtì ekwǫ̀ habitat. Until that happens, Mobile Caribou Conservation zones, like the ones for the Bathurst herd, should be implemented.

As part of the protection measures, the board recommends expanding the Tłı̨chǫ Government’s Ekwǫ̀ Nàxoède K’è program (Boots on the Ground) to post-calving and summer ranges to monitor the effects of climate change.

Background information and the board’s full list of recommendations on the Bluenose-East herd can be found at the end of this article.

The WRRB was supposed to deliver its decision on the joint management plans for both the Bluenose-East and Bathurst herds. However, the Bathurst decision has been delayed until September since ENR has yet to provide the board with the final report on the herd’s calving ground survey from last year.

The board explains the delay in a letter dated June 7 that was sent to ENR Minister Robert C. McLeod and Tłı̨chǫ Grand Chief George Mackenzie.

CKLB reached out to ENR to see what was causing the delays. According to Meagan Wohlberg, spokesperson for the department, the report is going through its final review.

“We regret that the WRRB has had to delay its submission of its final Reasons for Decision Report. That said, the Department feels it is imperative to ensure the final report is comprehensive and accurate prior to being released,” she wrote in an email.

CKLB asked for specific reasons for the department not submitting the report when it said it would.

Wohlberg said other management activities took priority over delivering the report like collaring an additional 66 barren-ground caribou for monitoring and finishing the spring calving surveys.

“Given that all harvest on the Bathurst herd is already closed and unlikely to change as a result of the WRRB process and/or additional demographic data in the survey report, ENR opted to prioritize the Bluenose-East survey report for completion, since decisions on changes to the Total Allowable Harvest had yet to be made for that herd,” she said.

According to Wohlberg, the report will be shared with the WRRB in the next few weeks.

The board has postponed the Kokètì ekwǫ̀ herd proceeding until July 19. If it hasn’t received the report by then, the board says it will consider “compelling ENR officials” to explain the hold up.