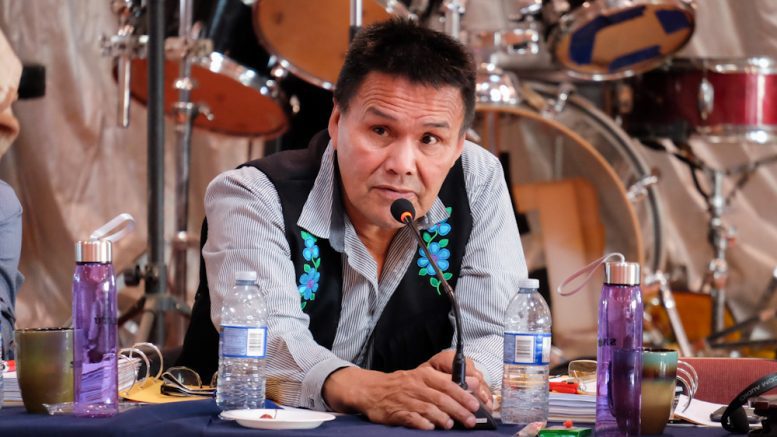 What is the most effective way to conserve caribou?

The board decided to do away with Total Allowable Harvest (TAH) restrictions in favour of community conservation plans.

Colville Lake and Délı̨nę are the first two communities to have their plans approved — pending a few conditions for each.

“We already have a way of managing our caribou,” says Joseph Kochon, band manager of Behdzi Ahda First Nation. “We don’t need somebody else to come in and tell us that this is the way things are. We’re working towards implementing a system that’s been there for a while, since the beginning of time.”

This past January, the community hosted a three-day “listening session.” Groups from across the Sahtú and beyond — including Tłı̨chǫ and Inuvialuit representatives — came together to discuss the best way to regulate caribou harvesting.

It was the first of five similar sessions that will be held in each of the five Sahtú communities.

Wilbert Kochon is the chief of Behdzi Ahda First Nation. He says the move away from the tag system and TAH has been a long time coming. According to him, the system was put in place more than a decade ago during a hearing where he says “nobody was prepared.” Chief Kochon says his people were never supportive of the tag system.

“It’s really hard to let somebody else manage and oversee something that you live on a daily basis,” said Joseph during the sessions.

“We don’t talk about threshold, TAH … It’s like talking about residential school. It hurts our people. Those things are such a thorn in our people’s history,” said Walter Bezha, a Délı̨nę representative.

CKLB reached out to Bezha multiple times for details on his community’s plan but has not heard back.

Following the inital publication of this article, the Department of Environment and Natural Resources contacted CKLB to clarify that the board’s decisions and recommendations are being reviewed by Minister Shane Thompson.

“The Minister will consider each and may accept, vary or set aside and replace each decision,” says Joslyn Oosenbrug, ENR spokesperson, in an email. “This includes the Board’s decision to recommend to the Minister the removal of the Total Allowable Harvest (TAH) in hunting area S/BC/01 and implement Colville Lake’s community conservation plan.”

Oosenbrug added the minister must respond to the SRRB within 60 days, but can request a 30-day extension.

Samuel Haché is an SRRB member. He said the move away from the TAH system allows communities “to take ownership, take responsibility, because it’s ultimately their food security on their land. And those are all traditional rights that have been highlighted in the land claim agreement.”

Joseph says he was pleasantly surprised by the board’s decision.

“We’ve always been fighting an uphill battle in everything we do,” he says. “It’s very surprising to my community and my Elders.” Now he says the community has its work cut out for them to implement the plan.

Before the SRRB officially approves Colville Lake’s plan, the community still has to submit an outline of outline of ɂǝdǝ (caribou) monitoring and harvest monitoring information and reporting timelines, a plan for caribou conservation and food security (alternative harvest), and an evaluation framework.

Once that is received and approved, then the TAH system will be lifted. However, in its decision the SRRB says it reserves the right to reinstate the system if needed.

“It’s a last resort,” says Haché. “If we see there’s really big problems happening with the populations and objectives are not being met for whatever reason, it’s always a possibility to go back.”

“ENR is willing to work with the SRRB and Sahtú communities on their community conservation plans which will help keep harvest within agreed-upon limits,” says Oosenbrug.

With caribou migration crossing several regions across the NWT and into Nunavut, part of the community plans must include how they will manage a species that is important to many other Indigenous groups outside of the Sahtú.

CKLB asked whether the different approaches to managing the herds may cause confusion between regions.

“Other regions can follow suit and do their own plan,” said Chief Kochon. He also gave advice to communities looking to do so: “Don’t involve somebody else to do it for you, otherwise it’s always going to be difficult.”

He added that his people did not support some of the other management proposals like the aerial wolf cull.

Haché says the dialogue between communities at the listening session helped clarify how different groups decided on management within their territory.

“Fundamentally, I think as long as there’s proper communication and sharing of knowledge, I don’t know why things would not work out for everyone,” he says.

From ENR’s perspective, “It is important to ensure that overall harvest of barren-ground caribou herds are managed consistently across the entire herd’s range, as the ultimate goal is promoting conservation of the herds across their entire range,” wrote Oosenbrug.

Chief Kochon says education will be a crucial part of his community’s plan, including new hunters.

Joseph said the education will be generations of experience compressed into rules community members and other hunters in the region must follow. Those specific rules will be determined through upcoming workshops, he says.

He added the community wants to incorporate these teachings into schools.

“In the future, if some of our members break these rules, then there’s going to be ways to ensure those don’t happen again.”

Finally, the board recommended replacing the names of the management zones:

The board further recommends specific communities take management leadership in each zone with Colville Lake having primary responsibility in Gow’ı Ɂǝdǝ Nę́nę́, a shared role with Fort Good Hope in Tuyeta Ɂǝdǝ Nę́nę́, and that Délı̨nę take the lead in Ɂehdaı̨la Ɂekwę́ Nę́nę́.

The name for each zone “doesn’t really resonate with the communities,” says Haché. The new suggestions are “more meaningful as it relates to Dene language.”

The next public listening session is scheduled for next spring in Délı̨nę.