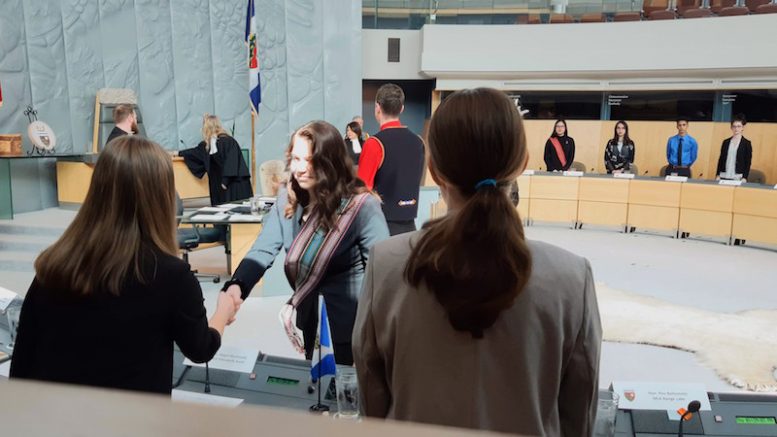 Youth mental health was top of mind during the 17th Youth Parliament session this week at the Legislative Assembly.

The 18 youth MLAs (Monfwi representative Magen Rabesca was absent due to an emergency) debated a motion to introduce “dedicated youth mental health specialists” in high schools across the territory.

The teenagers debated for about 45 minutes with cabinet opposing the motion due to there not being any mention of funding.

Peo Boitumelo, in place for education, culture and employment minister Caroline Cochrane, said the motion was too broad and recommended focusing services in the communities that need it most.

Sahtú representative Gosahte Bird drew on her personal experience in waiting for mental health services during the debate. Ultimately she abstained from the vote; before doing so she said, “Our youth just doesn’t have the trust.”

Hay River North youth MLA Madison Beck, who was the motion’s seconder, pleaded with cabinet to focus on the need to keep the youth in their communities rather than sending them down south and offered that costs could be recouped that way. 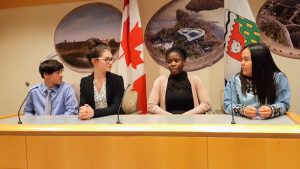 Ultimately the motion passed by a narrow nine to eight vote.

Would you do it again?

The youth MLAs have been in Yellowknife since Monday and spent the week preparing for the debate in the house. Danielle Mager is the communications manager for the Legislative Assembly and she said the youth are encouraged to vote as cabinet and regular MLAs. While the program aims to have each youth representing their actual riding, she added, several regions didn’t have any applications so Yellowknife students filled the spot. Interestingly, Mager said, most applications from young women; this year there were 16 women and three men, almost the exact opposite of the actual Legislative Assembly.

During the break, the four youth MLAs (two from cabinet and two regular) available to the media for a mock scrum said they sympathized with the other side and prioritizing services was difficult.

They also came to realize the devil is in the details. Crystal Kisakye, sitting in for the Minister of Industry, Tourism and Investment Wally Schumann, said initially the motion was appealing until cabinet realized the cost of such a program and the need to focus it more.

CKLB asked if the youth had other ideas than counsellors to deal with the growing mental health needs in the territory.

Kisakye said cabinet had considered the question in private discussions and thought a youth-led Kids Help Phone could be an option. Youth who didn’t want to talk to an adult could connect with another youth anonymously and chat about what they were feeling.

During the scrum, the youth MLAs were asked who would consider a career in politics following their experience. Without a second thought, all four raised their hands.


The executive council gathered at the Legislative Assembly late Tuesday morning for a press conference.


Nipatur̂uq means to have a loud voice or to speak loudly.