CKLB spoke with the candidates running in the upcoming Monfwi by-election.

The candidates were asked the same questions about their platform and their decision to run for the position in the Legislative Assembly.

The transcription has been edited for clarity. 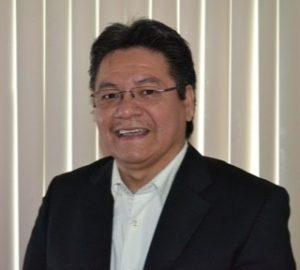 John Gon is running for MLA of Monfwi. (Photo courtesy of John Gon.)

Q: Why did you decide to run for this position?

A: I’ve been involved in the Tłı̨chǫ Government, their meetings in the communities for a number of years. I’ve been a stand-by observer for about 15 years now and recently been talking to people, and they expressed a number of concerns, a number of issues that is vital to the community.

So I decided to run for MLA. It didn’t come as a surprise because I’ve been contemplating my candidacy for a number of years. I know Jackson Lafferty hasn’t been challenged within the last couple of general elections and when when he resigned he left a vacancy.

So I thought it might be a good opportunity to run in this election, because I feel like I’m qualified for the position. And I feel confident that I can speak for my people.

Tell me about your platform. What are the biggest issues facing the communities?

And thanks to the Tłı̨chǫ government, there’s a shelter unit in Behchokǫ̀, they can hold about 15 people. When I was growing up in Behchokǫ̀ there was no shelter unit and we didn’t need one because everybody had homes, and their family had homes. People would go out into the annual bush camps to live out in the bush, but not today.

You’re seeing the increase in a number of homeless people because there’s lack of housing in their communities. It’s not just in Behchokǫ̀, it’s also in other outlying communities like Whatì, Gametì and Wekweètì and those people are crying out for homes and homes-related issues as well.

What will you do to ensure there is more affordable housing in the Tłı̨chǫ?

The government has been sitting on $60 million that was geared towards building new homes in the territory. I know we’ve got a small part of that for the Tłı̨chǫ region, Behchokǫ̀ is going to build the 10 new units last time I heard and this is just a piece of the pie that’s not big enough.

And when when you have 100 to 150 people looking for new homes, and you’re providing them the 10 houses, it’s absolutely ridiculous.

I propose to build a multi-family unit which is like an apartment building to house these people right away. That’s what I want to do. I want to help them and the way to do is to build new houses and thereby creating employment opportunities in the communities.

I know COVID-19 and everything has slowed down, people are suffering. And we’re slowly getting out of this trend, people are going back to work. And things will pick up soon and hopefully we will create prosperity for communities. 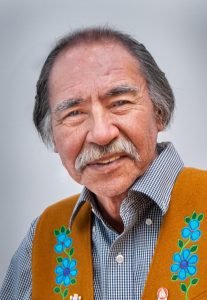 James Wah-Shee is running for MLA of the Monfwi riding. (Photo courtesy of Doreen Washie.)

Tell me why you’re running for MLA?

Fundamentally, the reason why I decided to run was that as an MLA, I wanted to ensure that the Government of Northwest Territories and the federal government implement the land claims, in cooperation with the Tłı̨chǫ Government.

So it takes tripartite parties that negotiate the land claims and governance, and it was concluded in 2005. But the implementation has to be ongoing, so we want to ensure that sufficient resources are given to the implementation of the different sections of the Tłı̨chǫ Agreement. The other thing is that I’m interested in climate change, and the whole reconciliation process.

What do you think is the most pressing issue to the Tłı̨chǫ people?

Well, right now it’s housing. But I understand the federal government allocated some millions of dollars for the Northwest Territories, which will go directly to Aboriginal governments and also to the Government of Northwest Territories. So I believe there’s been a start, and I am aware that there’s been a lot of meetings previously, before the announcement was made. So I think eventually, the money has to go to the community government, they know what the needs are in the communities and so forth.

What do you hope to accomplish if you do get elected as MLA of Monfwi?

I think the implementation of the Tłı̨chǫ agreement and governance has a significant impact in our area, and this way, the benefits will go to the people that reside in communities and also there has to be a way of having better cooperation between the Tłı̨chǫ Government, the GNWT and the federal government.

That’s not only the implementation of land claims and governance, but I think there’s a lot of other areas I think cooperation is needed, like in terms of the tackling the whole issue of climate change and the impact it has on our economy.

I would like to a more equal system for the economy, dealing with our environment, also the impact it has on wildlife. Because originally, when we signed under Treaty 8 and 11, our way of life will always continue the way it was. So what that means is hunting, fishing and trapping, and to have management and control over wildlife, which Aboriginal people live off.

We are the ones that live off the wildlife and more so than anyone else and so we want to ensure that we continue now into the future. I think we’re going to have to have a second look at the whole mining industry, which has had significant impact on our land and wildlife. 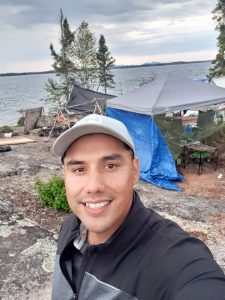 Why did you decided to accept the nomination to run for Monfwi riding?

So I was a renewable resource officer for eight years in my community in Behchokǫ̀, and it got to the point that I was very cultural sensitive, with the caribou ban, and enforcing that on my own people.

After eight years, I decided to go back to post-secondary to learn a new set of skills, which is finance. And during that program, I learned about leadership and the opportunity to work for my people, and advocate for programs and services that are delivered through the GNWT and having respect from people from the community that do believe in me and support me.

And after deep thinking, I felt that I was at a place in my life where I like to give back. And that was the biggest thing for me to follow through.

So what is your platform?

So my platform started off at the beginning, I was going to advocate for another Monfwi riding seat for the outlining communities. I want to address housing, and encourage more education, or advocating for more employment through the GNWT, senior management and other similar positions for all communities.

But right now, I have been doing some campaigning in Behchokǫ̀. So I’m collecting data from the people and it will be up to the people to create an agenda of what they would like to see in this two-year term as elected.

So it’s a platform to give people an idea to start thinking about, what do they want to see? What’s very important for them, their community level? Because the platform is just to generate ideas. And once people share information with me, I’ll have a better idea of what I would like to see if elected in that in that two years time.

You have been collecting information, data from from the visits you’ve been making in Behchokǫ̀ and Whatì. What are the most people concerned about right now?

It’s housing and property taxes are the two things that are coming up quite a bit. The second is kind of like healing and treatment, while at the same time employment and caribou. Those that are what are mainly comes up while visiting people in their homes.

It’s not the same each home I go visit. So that’s where I have to record it so that I can add it up to see what’s the biggest push for people. I feel that at the end of the campaigning, we’re coming down to housing, and I think the caribou will come second.

That being said, I know when you learn about theories of how to help people, it’s called Maslow’s hierarchy of needs. So people, they need their basic needs, and psychological needs met to reach self-fulfillment.

Basic needs are shelter, food, clothing and psychological needs are education, health, wellness. So we all have good ideas, but you have to make sure those are met first in order to move forward. That’s what I feel like people are are asking for at the territorial level.

CKLB reached out to Jane Weyallon Armstrong multiple times, but was unable to set up an interview in English before publication deadline.

CKLB host Mary Rose Blackduck interviewed Weyallon Armstrong in Tłı̨chǫ and you can listen to that here.

CKLB Radio · Jane Weyallon Armstrong running to be MLA of Monfwi
The seat for Monfwi became vacant when Jackson Lafferty resigned from the position on June 4. He held the seat for 16 years.
Voting will take place on July 27 in Behchokǫ̀, Whatì, Gametì and Wekweetì.
Share this...


The Board of Management decided on an assessment of the "culture and atmosphere for the entire office" rather than an investigation into Clerk Tim Mercer.