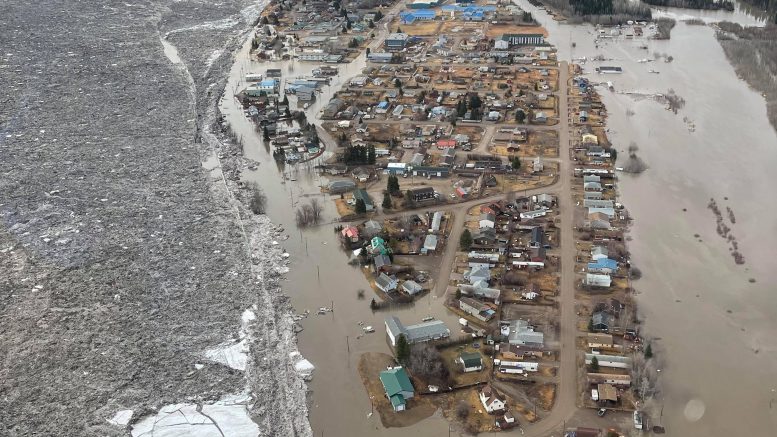 An aerial view of the flooding in Fort Simpson. (Photo courtesy of Hilda Gerlock.)

Around 700 residents from the island in Fort Simpson have been displaced from flooding.

However, he credited the actions of the emergency response team who led the evacuation.

“They’ve been really been very professional,” he says, “they’ve been working in that fashion with our community members.”

Of the 700 displaced people, two planes took around 60 elderly residents to Fort Smith.

“I’d like to thank Fort Smith, for taking on our people,” Antoine says.

Around 40 people are at a community campsite, while approximately 60 people remain on the island despite the evacuation order.

The remainder are either camping along the highway, staying in motor homes or staying at friends and relatives.

Lynn Canney, 54, the owner Mackenzie Rest Inn, was one of the residents to drive out of the community.

“I was really, really stressed, I didn’t want to leave the house,” she told CKLB, “As soon as we got off the causeway, I was so relieved.”

Power out on island

Mayor Sean Whelly and Chief Antoine say the water has now breached the causeway and power is out on the island.

Whelly says the village tried keeping the power running as long as possible, but it eventually became unsafe.

“The power plant operator had to be rescued out of there with a loader,” Whelly says.

He adds the power that is available on the higher ground is being run by a generator and he encourages everyone to use their appliances sparingly. This includes turning off hot water tanks that are heated with electricity, while cook to use only one burner or better yet a barbecue.

“Try to conserve power at all costs,” Whelly says.

Antoine says the water treatment plant has also been shutdown to prevent the overflow from contaminating the area.

“So we have water for a number of days,” he says, adding he and Whelly will be discussing the water situation to ensure the community continues to have access.

Waiting for the Deh Cho to break

Antoine says on top the current flooding from the Liard River, flowing into the Deh Cho (Mackenzie River), the community is worried about what is to come as the Deh Cho is yet to break.

“This is just the Liard River, the Big River hasn’t broken yet,” he says, “so it’s always in the back of our minds.”

Whelly says the water level in the community was around 15.7 metres on Monday morning.

He says after comparing a photo from the 1963 flood — the largest in recent history — he realized the current levels have surpassed it.

Whelly says the situation grew even bleaker on Monday as temperatures dropped and it began snowing in the early hours.

“I was thinking ‘Well, can things get any worse than that?’ ” he says with a small laugh.

Antoine says anyone still wanting to be evacuated can register at the Village of Fort Simpson public works building, where they can also access food.

Anyone looking to support those affected in Fort Simpson and Jean Marie River can do so here.

‘Don’t be afraid to speak up’: Fort Simpson teen speaks against bullying on Pink Shirt Day