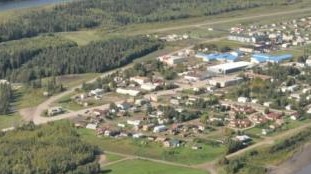 RCMP are investigating after a man was shot by Environment and Natural Resources (ENR) officer in the Dehcho community of Fort Simpson.

Mounties stated in a news release Saturday that it happened on Friday when the ENR officer shot at a bear that was within the town’s boundary and was posing a safety concern in the community.

Police say the ENR officer discharged his firearm in response to the bear’s aggressive behavior.

Shortly afterwards, RCMP stated that a man reported he had been injured as a result of the shot.

The injured man has been transferred to Yellowknife for treatment of a non-life threatening injury, Mounties say.

They don’t say where on his body he was hit or where he was in the community he was when it happened.

The bear was located later and destroyed but it’s not clear by whom.

Neither the victim nor the ENR officer have been identified.

Police have not said what type of firearm was used as they continue to investigate.

Bears have been causing problems in Simpson.

According to ENR officials, three bears were shot and killed by the department in the community this past August compared to nine in August of last year.

Seven bears have been trapped and relocated across the Dehcho Region this year, according to ENR officials.