Thomas Berger passed away at 88 on April 28. (Screenshot of video from the UBC Indigenous Arts Foundation.)

Thomas Berger, whose inquiry brought Indigenous rights and recognition to the forefront of Canadian politics, passed away on Wednesday.

Berger said a pipeline across the North would have a devastating effect on the Indigenous people who lived there and had land claims. He recommended any plans for the pipeline be delayed until the land claims were settled.

Berger was largely credited with actually listening to the Indigenous people in the NWT. 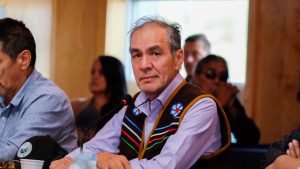 Dene National Chief Norman Yakeleya spoke with CKLB Thursday morning about the impact of the inquiry.

He says his thoughts are with Berger’s family.

“He will be remembered fondly,” he says, “for his strength, determination and courage to tell the federal government there’s more work to do before any type of development happens in the North, and that gave rise to the recognition of the Indigenous people.”

Former Dene Chief Frank T’Seleie, known for one of the most iconic speeches of the inquiry, says Berger was in his thoughts Wednesday night.

He says the Berger inquiry was a time of great change and was a special moment to live through, but it wasn’t an experience he shared alone.

“I was just reflecting what our people were feeling at the time,” he says of the speech.

T’Seleie says the inquiry has led to many changes across the country.

“For me personally, it entered into a period of admittance on the colonial government and it set the stage for truly good things happening in terms of reconciling,” he says.

Stephen Kakfwi, former Dene National Chief and premier, was another participant of the inquiry who says he will remember Berger as a true friend.

“He is probably one of the most influential Canadians, the most honest and sincere Canadians who have ever come North to engage with us,” he says. “For me, he’s made more of an impact on the North than any Prime Minister.”

He says the 10-year moratorium Berger recommended in the inquiry gave the Indigenous people time to further organize.

“It has been primarily Indigenous leaders who have presided over the Legislative Assembly since that time,” Kakfwi explains.

The inquiry was recognized as a time when young leaders, including Kakfwi and T’Seleie, became major figures in the affairs of the territory.

I am sadden on the passing of Thomas Berger and my condolences to his family. My sincere thank You for your honest work on our behave. 1974 you came into our country to listened to us tell our stories of who we are on our Lands. You helped us in the Berger Report in many ways.

Melaw Nakehk’o is an artist, moosehide tanner and filmmaker from Líídlįį Kúę First Nation. She says growing up while these young Indigenous leaders were on the scene taught her many lessons, including the importance of listening to Elders.

Dehcho First Nations Grand Chief Gladys Norwegian says the inquiry wasn’t about the pipeline, but about “our ways of life.”

“Berger really understood what our young leaders were fighting for,” she explained.

Thomas Berger fought for justice. He was a champion to Indigenous peoples across Canada, and especially in the NWT. He cared deeply about Indigenous rights and equality, and what our elders had to say. Berger helped move us forward. He will be missed. #nwtpoli #cdnpoli pic.twitter.com/J6WS5Mq0g6

In an emailed statement NWT Premier Caroline Cochrane says Berger “gave Northerners a voice when they needed to be heard most.”

The inquiry was also groundbreaking as CBC created an Indigenous news team that broadcast nightly reports from the inquiry in six languages.

Berger passed away of cancer at the age of 88.


Powerful drum dances, a chance to gather and the opportunity to discuss the path forward shaped the week of events.