The Northern Images art store has been a staple in Yellowknife for over 40 years.

Last month the shop had to close its doors, giving NWT artists something to worry about as their art moves into a different space.

“It’s really, really sad for me to see [this] place shut down,” says Archie Beaverho.

Beaverho is a painter, originally from Behchokǫ̀. He has been contributing his paintings to the shop for years and says this place has helped a lot of local artists.

Now as goods move online, Beaverho is unsure as to what that might mean for his livelihood.

“I just wish there was a better way for artists,” he says, it’s tough relying on others to buy your goods.

Once located in the middle of downtown, he describes the empty store “like a friend that’s missing.”

Beaverho has tried other online outlets such as Facebook to sell his paintings in the past; he’s convinced an online model won’t have the same appeal as a store.

But artist Antoine Mountain is a little more optimistic to see his work move online.

Mountain is Dene from Fort Good Hope and has been contributing his paintings for decades.

“One advantage to going online is that it is much more accessible to people all over the world,” he says.

Although Mountain has had a positive experience online, he says he “still prefers the store.”

“You miss that personal touch” when you buy online, he says. A sense of the art is lost “because it’s only as good as your photographic skills.”

Mountain says, “There’s always a problem of trying to get your name out there. And that’s, the advantage of being connected with one particular gallery.”

Now northern artists, need to find a new way to showcase both themselves and their art online. 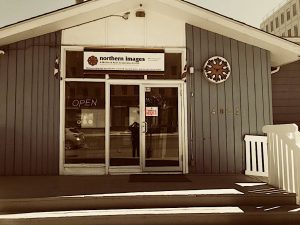 The Northern Images store in Yellowknife has officially closed its doors as of Mar. 22. (Photo courtesy of Duane Wilson)

The last of its kind

“It was a difficult but necessary decision to make,” says Wilson.

Despite the pandemic, the store “struggled to be profitable for a few years.”

Wilson says certain pieces will be offered at the Yellowknife Co-op and  Gallery of the Midnight Sun. The remaining art will be shipped back to a warehouse in Mississauga, Ont.

He acknowledges that this may make it harder for artists since going online will “force them to be webmasters and marketers.”

“Just like artists are changing with the times, you know, we’ve got to change along with them.”

But for artists like Beaverho, he says, “I think I want the store back.”

Lisa Seagrave is the owner of the Midnight Sun Gallery and former manager of the Northern Images store.

“We want them. We want to bring the talent and incredible artwork that’s available here to the public directly through our doors,” she says.

Managing the Northern Images shop was the reason she came to Yellowknife back in the early ’90s.

“It has been a really important Yellowknife fixture for many, many years,” she says and she’s saddened to see it go.

She describes it as the loss of another COVID-19 casualty.

“Many galleries have come and gone over the years,” she says, “I don’t think that void will remain for very long.”