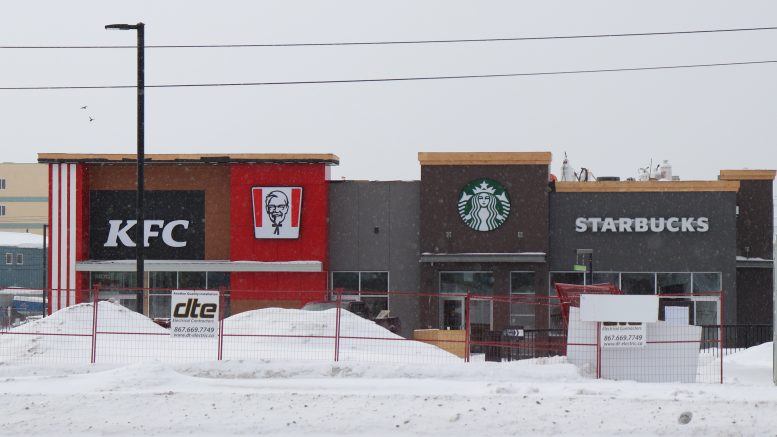 The new KFC and Starbucks in Yellowknife is set to open in early May. (Brett McGarry/CKLB Radio photo)

The long-awaited opening of the new Kentucky Fried Chicken in Yellowknife will be on May 3.

Erin Fenwick, marketing and communications manager for Soul Foods Group, confirmed the date and said construction of the restaurant is on schedule.

“These dates are subject to change with the current COVID climate,” she said. “But we are tracking towards those dates and everything looks good so far.”

Fenwick also said that the Starbucks portion of the Old Airport Road complex will be opening on May 7.

Both chain outlets are almost fully staffed, with only a few roles left to be filled in management and general staff.

Fenwick also said Soul Foods Group is planning for an opening ceremony which, due to COVID-19, will be invite only.

“We have many of our leadership team members in Yellowknife right now,” she said.

“Some have been there for over 10 weeks building relationships with government officials and we will be reaching out to various chiefs for the ceremony as well.”

Officials with the City of Yellowknife may also been contacted to help co-ordinate traffic congestion in the area, something that Soul Foods Group has been taking into consideration since planning began two years ago, according to Fenwick.

CKLB Radio reached out the City of Yellowknife last week and did not get a response by publication time.


No one is injured in the incident.