Preparing a dose of the Moderna vaccine. (Photo courtesy of the Department of Health and Social Services)

Dr. Kami Kandola, chief public health officer, says an update on the easing of restrictions in the NWT may come as early as next week to be implemented by the end of April.

“If we are looking to move to phase three, we would start looking towards the end of April for some preliminary easing, then a second phase of easing based on the vaccine roll out and where the third wave is going in the rest of Canada,” Dr. Kandola told reporters in a Thursday press conference. 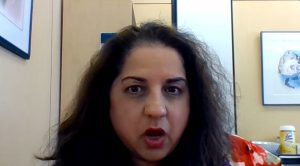 Restrictions most likely to be eased first involve local outdoor gatherings and increasing capacity for businesses. As vaccination rates increase further in the North and across Canada “more targeted permissive self-isolation protocols and travel restrictions may be considered.”

“Outdoor events like Folk on the Rocks present less of a risk than an indoor environment,” she said and her office is reviewing them on an exemption basis.

Dr. Kandola says, however, these numbers include non-resident rotational workers who come into the NWT.

More detailed information on the vaccination rates in each community will be given to community leaders and Indigenous governments first.

These vaccination numbers also do not include the population under 18, as studies are currently being conducted to determine the effectiveness of the vaccine to people in this category.

For this reason, Dr. Kandola said that the territory is unlikely to achieve true herd immunity anytime soon.

Kandola also said that the B.1.1.7 variant of the virus from the UK is of increasing concern as it is more aggressive than the original strain of COVID-19.

The most recent cases of COVID-19 in the territory – one from out of territory travel and one at the Diavik Diamond Mine – have been from the variant, which poses a greater risk to health and cause more severe reactions in younger people.

When asked at what rate she would be comfortable with reducing travel restrictions, she said that due to the prevalence of variants and the ongoing third wave reaching a vaccination rate of “85 per cent would be great.”

The more we are vaccinated, the smaller the impact the virus will have on our health-care system, she said.

The Moderna vaccine available in the NWT has also shown promise in protecting against this variant and the Office of the Chief Public Health Officer is expecting more data on its effectiveness against other variants.

Julie Green, minister of Health and Social Services, had previously stated that the GNWT was unsure of how well the vaccine prevents transmission of the virus.

Dr. Kandola said there are now some studies that show the vaccine being effective to prevent spread.

Studies from Israel and the United States show that 10 days after being vaccinated with the Pfizer vaccine, there is a significant drop in spread in asymptomatic carriers. Dr. Kandola said the Moderna vaccine is a similar mRNA vaccine and “has the same platform” as the Pfizer version.

These studies, however, are not peer reviewed and countries other than the USA have not used that information to review policy.

Hub communities will have the vaccine on an ongoing basis requiring appointments. In Yellowknife there will be a walk-in clinic for vaccines starting on April 12.

Dr. Pegg and Dr. Kandola both encouraged residents to receive their vaccines. The age group in the NWT that has had the smallest uptake in vaccination is people from 18 to 29, followed by 30 to 45.