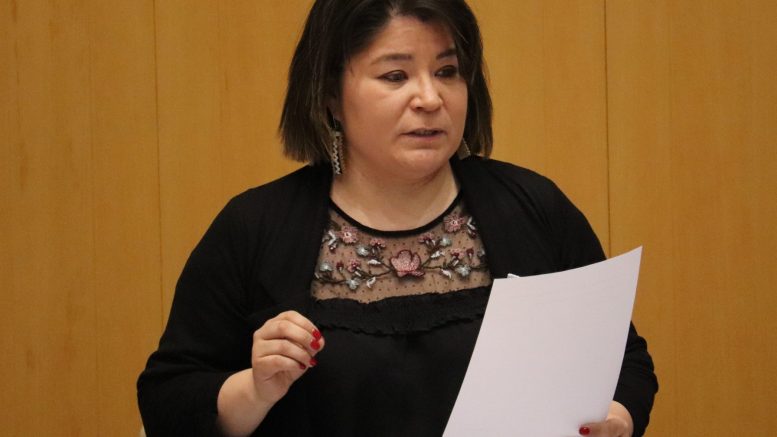 Regular MLAs passed a motion to fast-track the GNWT’s review of the NWT housing corporation during a housing-themed sitting of the19th Legislative Assembly, Wednesday.

The motion directs the housing corporation to update its mission statement and include referrals to governments programs prior to evicting residents in public housing.

“Until the housing corporation incorporates and acknowledges the relationship between housing and health and well-being into its policies and practices, the NWTHC will not benefit our residents to its fullest potential,” she said.

All regular members supported the motion with the premier and cabinet abstaining.

The territorial government has 120 days to respond.

Rylund Johnson, MLA for Yellowknife North, highlighted the slow process of the Government of the Northwest Territories transferring land to the NWT Housing Corporation for fee-simple ownership.

Fee-simple title being the absolute ownership of land.

Yesterday, Johnson said the Department of Lands is making it difficult for the housing corporation to own their buildings.

“If we want to be successful in promoting home ownership and in transferring units to people to actually own their houses, then we need to transfer all of the housing corporation’s leases to (the corporation) in fee simple title.”

He said that in turn, this would help create more housing units in the North and lay the foundation for a larger housing market.

Johnson pointed out that in 2014, the housing corporation entered into an agreement with the GNWT to have 838 leases transferred for fee-simple ownership for $1.

Shane Thompson, minister of Lands, said that since 2014, only 16 leases have been transferred.

When asked about barriers in this process, Thompson was not specific and said there needs to be consultation with Indigenous governments.

“That is part of our process. We need to respect our Indigenous governments; we need to consult.”

His department is currently working with the housing corporation to transfer the leases on 179 multi-family units .

“The timeline is: as fast as we can get it done, we will do it,” the minister said.

He said the consultation process takes 90 days and with the recent conditions of COVID-19, the GNWT has added another 30 days to the process.

Those and all other leases will be transferred for the agreed-upon price of $1.

Premier Caroline Cochrane was called to defend her housing minister and top bureaucrats after Rocky Simpson, MLA for Hay River South, called on the premier for a shuffle.

In his member’s statement, Simpson said this government has made “minimal progress” over the last decades to meet the housing needs of Indigenous peoples in the territory.

“This failure has contributed to disadvantaging Indigenous Peoples in areas such as education, employment, and health,” he said.

He suggested that Paulie Chinna, housing minister, did not grasp the housing crisis exists and suggested  her replacement, or the replacement of the department’s top bureaucrats, to solve their issues.

Cochrane shot that suggestion down.

“I am not going to consider a shuffle at this time,” she said.

“I know that every single minister here is compassionate. They care about their files, and they are doing a great job. I know that the minister of housing has so much passion for housing, but I know that housing is an issue.”

The premier said she spoke with her team about the changes that need to be made in the department and stated her commitment to addressing housing in the territory.