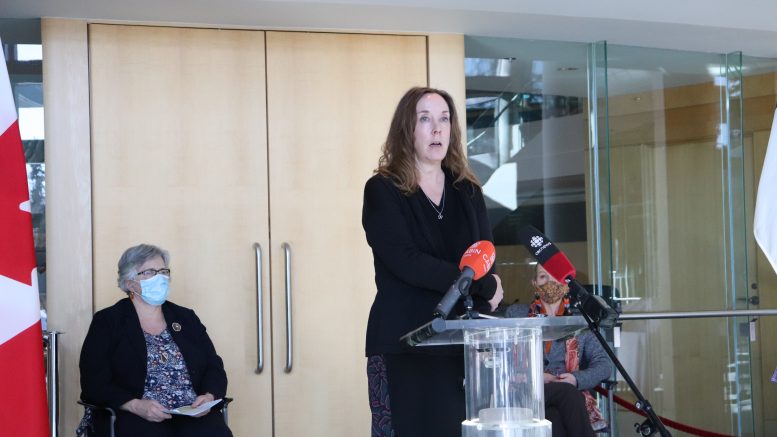 All adults residing in Yellowknife are now eligible for the COVID-19 vaccine.

This was announced by Julie Green, minister of Health and Social Services, during a press conference at the Legislative Assembly on Wednesday.

“With today’s announcement for the general population in Yellowknife, we have moved from scarcity of the vaccine to now having a strong supply,” Green says.

Nearly half of the NWT’s adult population has received at least one dose of the vaccine, Green says.

But she reiterated the importance of the second dose.

Dr. AnneMarie Pegg, the territory’s medical director, says there has been an issue with missed appointments.

She says the majority of the no-shows happen between 5 and 7 p.m. on weekdays and on Saturday mornings.

“Please show up for your appointment,” she concluded.

For those in communities who missed their first or second dose there will be another opportunity this spring.

Dr. Kami Kandola, the chief public health officer, says mobile teams will be returning to the communities in April.

But she encourages everyone to receive them then, as after that visit, residents interested in receiving the vaccine will need to travel to one of the larger centres like Inuvik or Yellowknife.

The subject of a vaccine passport was also discussed at the press conference.

This is documentation of vaccination to allow residents to travel freely.

Residents are able to apply for their vaccination record with the Northwest Territories Health and Social Services Authority.

But with no documentation being officially recognized for travel, Dr. Pegg urged residents to wait before requesting the files.

“We don’t know if that will eventually count as a proof of vaccination,” she explains.

Dr. Pegg adds there is a significant delay between applications and the departments ability to process them.

“I would encourage people who are thinking that they may want to request it — just in case or in anticipation of potential use — to hold off for now,” she said.

Dr. Kandola says travel restrictions will remain in place for the foreseeable future.

She says stage three of the Emerging Wisely plan won’t be initiated until every resident in the NWT has had the chance to be vaccinated. She adds the vaccination rate will also need to be at around 75 per cent in the NWT and the rest of country must have a handle on the pandemic, including the new variants.

But Dr. Kandola says there have been discussions around establishing a bubble with certain communities in the Yukon.

She says, if established, it would be similar to the agreement with Nunavut, where residents submit a self-isolation plan and can ask for an isolation exemption.

But she adds, these are just discussions.

“Nothing’s in place right now,” she says, “but we are impressed with Yukon’s vaccine rollout and how they’ve managed to keep cases low so far.”

Health officials repeated how the end of the pandemic is in sight, but added travel is still discouraged.

Premier Caroline Cochrane says the territory’s Compliance and Enforcement Taskforce will be increasing its presence at this time as March break approaches.

“Some of us are itching to travel beyond our borders, but non-essential travel outside the territory is not recommended right now,” she said.

Cochrane says flags will be flying at half mast on Thursday to mark one-year since COVID-19 was declared a pandemic.


Testing has identified six new presumptive cases at the mine.