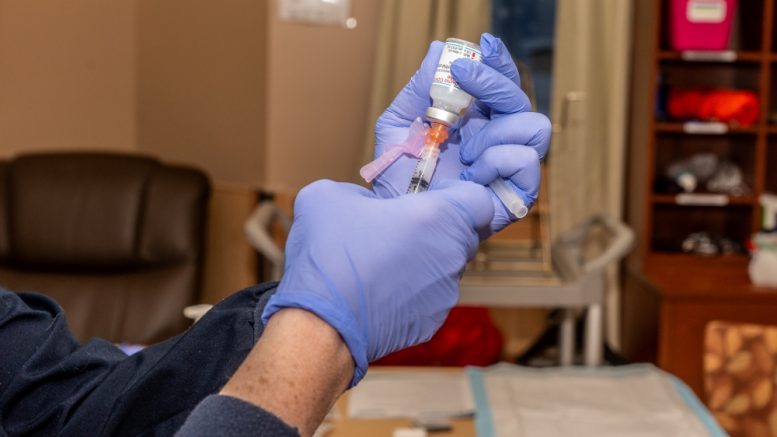 Preparing a dose of the Moderna vaccine. (Photo courtesy of the Department of Health and Social Services)

Residents in the NWT’s most remote communities should expect to see mobile vaccination teams arrive starting next week.

On Tuesday, the territorial government released its strategy to administer the COVID-19 vaccine.

While the majority of doses will be kept for priority groups over the next two months, some communities will have enough doses for all eligible adults.

The Northwest Territories Health and Social Services Authority has a schedule for all communities. The page also defines the priority groups for the first two months of vaccination.

CKLB asked for details on how residents can access the vaccine when it arrives in their community.

Dr. Kami Kandola, the chief public health officer, said logistics for administering the vaccine still have to be determined community-by-community, and will be communicated to leadership.

She also said residents in fly-in communities should “read up as much as possible on the vaccine” and have questions ready for the mobile teams. “We are going to be asking for informed consent before we give you the vaccine.”

To be considered immunized, you have to receive two doses of the vaccines within about a month.

The current plan is to visit communities once to administer the first dose and then return 28 days later for the second.

Julie Green, minister of Health and Social Services, says teams will be visiting communities multiple times so residents that are initially unwilling or cannot receive the vaccine will have the opportunity to do so again.

Health officials administered the first vaccines on Dec. 31 at AVENS manor in Yellowknife and Jimmy Erasmus Seniors Home in Behchokǫ̀. About 130 people, including residents and staff at both facilities, have been vaccinated.

The NWT government’s vaccine strategy says it has met with leaders from various Indigenous governments to “inform a culturally respectful rollout of the vaccine.” It adds that health officials will be communicating directly with leaders before the mobile teams arrive in their communities.

Dr. Kandola said one of the biggest concerns she’s heard so far has been getting vaccine information to Elders in their traditional language.

“For some people it can be provided in a written format, some people will be oral,” she said, “whatever means the communication in the best way that the Elders are informed about the vaccine.”

The strategy also reads that resources are “being finalized” in all official languages. Here are information sheets about the vaccine in some of the traditional languages:

Dr. Kandola said there will be two major factors in when restrictions will be lifted after residents are vaccinated: the rate of vaccination in the rest of the country and whether the vaccine helps prevent transmission.

The first isn’t looking good, so far — the rollout in Canada has been slower than anticipated.

The second is up in the air. Dr. Kandola says experts have not yet determined the vaccine’s effect to prevent the transmission of the virus. Essentially, this means while you may not get sick from it, you could still pass it to someone who can.

Dr. Kandola reiterated that the first restrictions to be lifted are likely going to be those limiting gatherings with travel being the last to go.

So far, the NWT has received 7,200 doses of the Moderna vaccine. Dr. Kandola said health officials expected three more 7,200-dose shipments over the next two months and a final shipment of about 20,000 doses for the general population in mid-March.

One case of COVID confirmed in Yellowknife, 10 contacts isolating