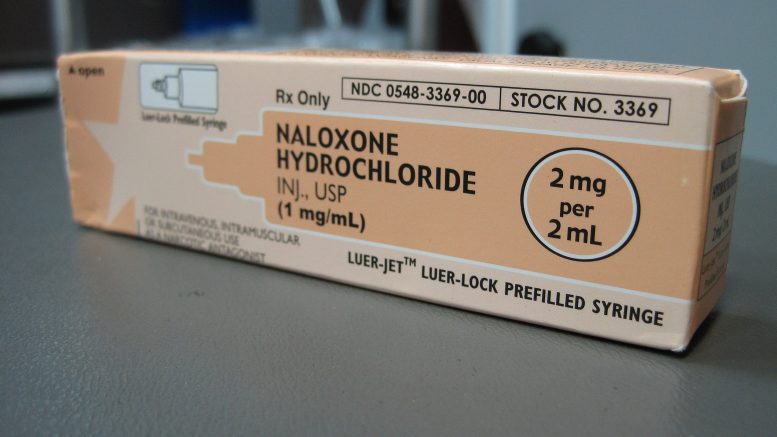 Naloxone kits (opioid reversing agent) are available at all hospitals, health centres and pharmacies in the NWT. (Photo courtesy of Wikipedia commons)

Public health officials are warning residents of the presence of a highly dangerous drug in the Northwest Territories.

A lab test on an NWT resident confirmed the presence of carfentanil — one of the most toxic opioids in the world.

The presence of illicit opioids comes while NWT residents face another major public health threat — the COVID-19 pandemic. Meaning the drugs are entering the territory while borders remain closed.

Julie Plourde, spokesperson for NT RCMP, says police are aware that illicit drugs are entering the NWT during the COVID-19 pandemic and are doing so by air, road systems and postal or courier services.

“The presence of carfentanil in the Northwest Territories is deeply concerning,” she says in an email.

Plourde says police will continue investigating the presence of illicit drugs in communities.

The release warns that other illicit drugs can also be laced with carfentanil, without the user knowing.

Roy Erasmus, a counselor and a life coach with Dene Wellness Warriors, says it is extremely important for someone suffering from a drug addiction to get help, especially with the presence of carfentanil.

Erasmus says anyone struggling with addiction can contact Dene Wellness Warriors to get help.

The release encourages anyone experiencing or witnessing an overdose to call 911. A federal law — the Good Samaritan Drug Overdose Act — protects people involved in an overdose from being charged for possession of a controlled substance.

Additionally, treatment for someone experiencing an overdose due to carfentanil may require more than one dose of naloxone — an opioid reversing agent. Naloxone kits are available at all hospitals, health centres and pharmacies in the NWT.

The public is warned against touching any suspect substance as any unintentional exposure to pure fentanyl or carfentanil can cause serious harm, including death.

Symptoms of an overdose include:

No more active cases of COVID-19 in NWT