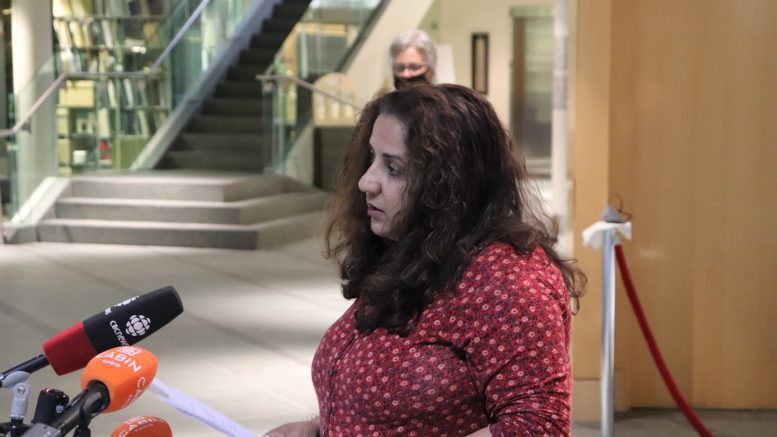 Dr. Kami Kandola says there is no risk of COVID-19 exposure for anyone at École St. Joseph in Yellowknife, despite a letter circulating social media claiming otherwise.

The note found on Facebook appeared to show École St. Joseph letterhead and stated two after hour school program workers had come into contact with a person who tested positive for COVID-19.

Dr. Kandola reassured the public at a press conference on Wednesday evening there is no risk and the letter was the product of a “miscommunication.”

“There is no exposure risk at St. Joes and this letter was not issued by myself,” she said.

She said the alert was linked to the worker at Gahcho Kué Diamond Mine who had a false positive.

However, she asked all organizations to contact her office directly before issuing advice.

The two presumptive cases in Yellowknife were confirmed to be positive on Wednesday, four days after health officials said they expected results. While the false positive from Gahcho Kué Diamond Mine was determined within hours of the initial test.

Dr. Kandola says this is because the rapid testing machines at the Stanton Territorial Hospital officially received accreditation on Tuesday.

This means positive tests will no longer need to be send to a laboratory in Alberta for confirmation — as was the situation with the cases in Yellowknife.

Another subject discussed at the press conference was the stigmatism that follows people who have COVID-19.

Premier Caroline Cochrane said this can be dangerous, because it deters people from admitting if they have symptoms.

“When people do lash out and blame that individual, it makes everyone else antsy to get tested,” she said. “We need to remember the northern spirit, we need to treat each other with kindness.”

Cochrane reflected on her time in social work where this could become a problem with other viruses in places like homeless shelters.