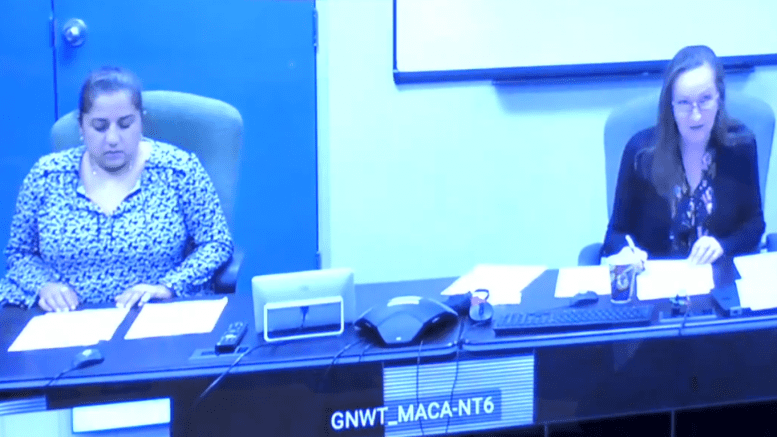 The territorial government acknowledges it needs to improve its communications around COVID-19, especially regarding its proposed secretariat.

Speaking with reporters Thursday morning, Russell Neudorf, the man in charge of the project, said all these questions are partly the government’s fault.

“I believe this is in part because we may not have done the best job at explaining how this body will benefit residents and businesses or explaining it in the context of our response thus far,” he said.

While at a committee meeting Thursday evening with several regular MLAs, Premier Caroline Cochrane echoed that sentiment and promised that if the secretariat moves ahead those communication issues will be fixed.

CKLB asked Neudorf how communications will be improved for communities.

“We do want to take a step back and make sure we have a well-defined and well-considered engagement strategy that we’re using the most appropriate means to talk to communities about the requirements,” he said, “and provide them the information they need so that they can understand the pandemic and understand the response the government is taking.”

When the premier first announced the secretariat, she said it had an estimated cost of $87 million over its two-year lifespan. The GNWT says some of that is covered by federal funding.

The government is touting the secretariat as a way to “find efficiencies” within its response and to provide better services by bringing them all under one roof.

This will also reduce the number of GNWT staff working on the response from 163 to 150, with most jobs being in enforcement. Of those, 66 will be outside of Yellowknife.

Neudorf told reporters that 86 of those positions have already been filled with current GNWT staff transferring to the secretariat on one-year contract with options to renew.

Asked how many new jobs are being created within the secretariat, Neudorf said that is a difficult question to answer. He boiled it down to 10 official new positions — all in Yellowknife — mainly in administration and communications.

“We think we need those positions to have the secretariat operate essentially like another department in government,” he said.

However, MLA Rylund Johnson pointed out on Thursday evening that the number doesn’t hold up.

“When I look at 150 new positions, I want to emphasize these are new positions because they didn’t exist before COVID,” he said. “I recognize we’re pulling them out of some departments and transferring over but already departments are starting to backfill them.”

Despite having a smaller staff and those expected efficiencies, the secretariat is still going to be costing additional money to NWT residents.

Neudorf told reporters it would cost $2.6 million more to establish the secretariat. That’s on top of the government’s current pandemic response cost.

For this year, the estimated cost for running the secretariat is $31.7 million; the vast majority of that, about $17.1 million, is to pay for isolation centres.

When MLAs return to the Legislative Assembly in October, the government will be asking for that additional funding for the secretariat in the form of a supplemental appropriations bill.

CKLB has asked how much the bill will be and if all of it is going towards the secretariat. We will update if this information becomes available.

CKLB asked Neudorf how a smaller staff and being more efficient leads to an increased cost.

He just reiterated that the secretariat was an opportunity to “find efficiencies”.

Following the briefing, Mike Westwick, in charge of the GNWT’s pandemic communications, sent an email saying, “Streamlining isn’t just about cost. It’s also about experience for residents and businesses.” He added, “We need to plan for the worst when we budget. And that’s what we did – we took our spending thus far, did an analysis on what we would need to address the gaps in our response, and are asking for those funds so we can provide better services for residents and businesses in a worst-case scenario where we are unable to find savings.”

Neudorf also didn’t give specifics on how this miniature COVID department would be dissolved but said it would depend on easing the public health regulations.

On Thursday evening, Dr. Kami Kandola, the chief public health officer, outlined future steps that may lead to changes of those regulations.

Several MLAs called for possible shorter isolation periods with the widespread capability of rapid-testing. This would also lead to at least one of the efficiencies the secretariat is said to be pursuing, and would drop the cost of isolation centres.

Other MLAs called for more compassionate assessment of isolation, especially in cases of the death of a family member or medical travel.

Ultimately, Dr. Kandola said these changes may be an option as the government continues to develop its response. However, she did not give specifics on when changes to public health measures would be coming.