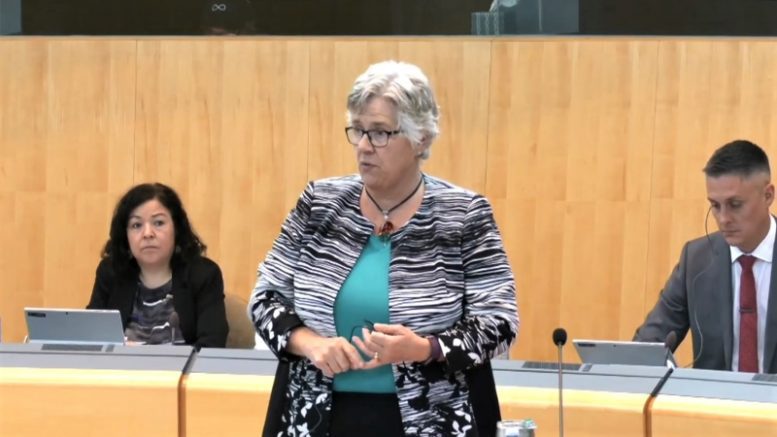 Julie Green had a busy first day of session as the new minister of Health and Social Services.

Regular MLAs peppered Green on several health-related topics, including the possibility of an addictions treatment centre in the NWT.

Jackson Lafferty, MLA for Monfwi, cited the Truth and Reconciliation Calls to Action to justify an appropriate local addictions treatment.

Number 21 calls on the federal government to provide funding for Indigenous healing centres and specifically that healing centres in the NWT and Nunavut be made “a priority”.

Green said there are currently no plans for create such a service in the North.

Instead, her department has engaged with two new centres in the south, bringing the total to six.

“The reason it’s in the south is because people can get in right away. They can choose the place they want to go. They can be in a co-ed or a gender-specific facility depending on their preference. They have access to a range of services, which we simply don’t have in the Northwest Territories,” said Green.

Lafferty made the argument that paying for people to go to the south is “money leaving the North”.

From January to June of this year, Green said 45 people have gone to treatment facilities with 15 of them completing their program.

“We’re going to be low on numbers this year,” said the minister, “there are more typically around 200.”

In her answers, Green referred to Nats’ejee Keh centre in K’atl’odeeche First Nation, which closed in 2013. She said it “failed” due to lack of suitable staff, the ability for intake at any time and confidentiality issues.

“It cost as much to run Nats’ejee K’eh as it does to contract the six other places in the South, and so we feel that it’s better value for money to have the facility-based treatment in the South, notwithstanding the fact that that money is not being spent in the North,” said Green.

Instead, her focus is on aftercare and on-the-land program funding.

The GNWT has set aside $1.8 million for on-the-land and mobile treatment aftercare programs. Each Indigenous government organization is eligible for the same amount of money. So far this year, Green said the Dehcho First Nations and the Inuvialuit Regional Corporation have been the only two organizations to apply for the funding.

Steve Norn, MLA for Tu Nehdé-Wiilideh, brought up the need for aftercare reporting with residents who return from southern treatment centres.

Green said her department plans to start surveying people who come back from treatment.