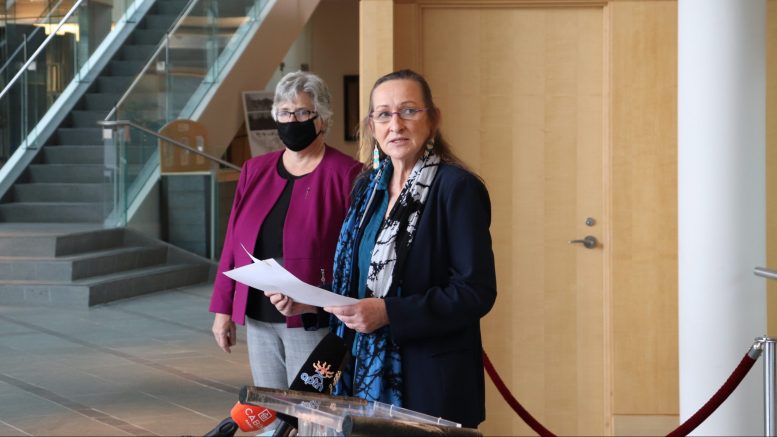 One case is in Inuvik after an individual arrived there on Oct. 10, travelling by road from Alberta.

A press release says the person isolated immediately and officials believe there is no further risk of exposure.

However, officials are warning of possible exposures from the other two presumptive positive cases in Yellowknife.

The two cases are related, as one person traveled and is believed to have transmitted the virus to another household member, a press release says.

At a press conference on Friday, Dr. Andy Delli Pizzi, deputy chief public health officer, says anyone who was at Anytime Fitness in Yellowknife on Oct. 12 between 3 and 4:30 p.m. and at the RCMP Yellowknife Detachment public waiting area on Oct. 13 between 11 and 11:30 a.m. may have been exposed to the virus.

Officials are in the process of contact tracing anyone who was at either location at those times — these individuals will be required to self-isolate for 14-days.

He adds there are no plans to temporarily close Anytime Fitness as contracting the virus from surfaces remains a lower risk.

The RCMP announced in a press release Friday evening that it would continue operations at the detachment and would be working with the Office of the Chief Public Health Officer (OCPHO) for contact tracing.

Dr. Delli Pizzi was tasked with addressing the media as Dr. Kami Kandola, the NWT chief public health officer, is on vacation but is expected back on Friday. 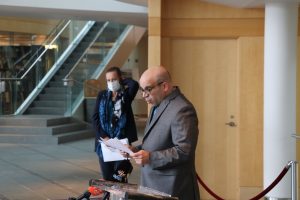 She discussed the territory’s successful handling of the first wave and says it will require the same dedication for the second.

“When the pandemic began, we made quick decisions about how we were going to protect our residents and our communities from a possible outbreak,” she says.

Cochrane says as cases rise across the South, it was only a matter of time before the virus re-entered the NWT.

“The second wave that was anticipated… Is here,” she says, “it was inevitable that we would eventually see new cases in the Northwest Territories.”

The presumptive arrival of the virus will not change current restrictions, Dr. Delli Pizzi says. There are no immediate plans for the territory to move back into Phase 1 of the Emerging Wisely plan, as the current number of cases remains manageable, he adds.

“There is no need to alter our overarching approach at this time,” he says.

However, the news of the presumptive cases has several businesses and organizations implementing changes.

The Nihtat Gwich’in Council announced it would be cancelling programming after the COVID cases were reported.

Good Morning to all our participants and families. We would like to send out this notice that all programming will be…

Several businesses across the territory have announced new mandates for masks for all customers and employees.

This includes the Inuvik, Hay River, and Yellowknife liquor stores.

I will be issuing a formal bulletin soon. In the mean time with another…

When asked about making masks mandatory across the territory, Dr. Delli Pizzi says the OCPHO has found it better to allow individual businesses decide for themselves.

“It’s less restrictive and it still can be very effective,” he says.

The presumptive positive tests are being sent to a lab in Alberta for confirmation and results are expected by Saturday.