A Yellowknife man who robbed the same convenience store twice has been sentenced to four-and-a-half years of prison time.

Qumuaqtuq previously pleaded guilty to the offences in January.

He was also sentenced for assaulting multiple correctional officers while in custody.

Charbonneau’s verdict was given as a result of a joint submission.

Charbonneau says when a judge receives a joint submission, the practice is for them to follow it unless found to be unreasonable.

“This sentence could be much higher,” Charbonneau explained at the NWT Supreme Court sentencing.

However, with all factors taken into account, she did find it reasonable.

A history of robberies and assaults 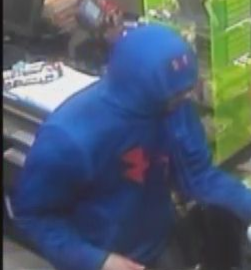 A still from a surveillance video at the Circle K Jonasie Qumuaqtuq pleaded to robbing. (Photo courtesy of the RCMP)

Charbonneau discussed Qumuaqtuq’s criminal record, which reflects a pattern of robberies and assaults.

In both of Qumuaqtuq’s robberies of the Circle K on Forrest Drive — one in the early hours of Jan. 14, 2019, and later that year in June — he covered his face and brandished a knife.

It was the same clerk working at the store both times, something Charbonneau says must have caused the individual a considerable amount of trauma.

In both occasions Qumuaqtuq took about $100.

Charbonneau also described the multiple assaults Qumuaqtuq’s committed, several of which occurred at the correctional institution. Qumuaqtuq punched one correctional officer and headbutted another. He then issued threats to one of the officers as well as his family.

“Such crimes are very serious,” she says.

Even more concerning was an assault he committed on his counselor.

When he requested she switch his medication and the counselor didn’t agree to do so immediately, he reportedly threw an object at her head and proceeded to punch her several times, Charbonneau says.

Charbonneau says the sentence could be considered lenient considering the charges, but additional factors must be taken into account.

Charbonneau discussed issues in gathering evidence of the robbery, including an unreliable witness and video footage where Qumuaqtug’s face coverings made him difficult to identify.

“It could be said that this case was not a slam dunk for the crown,” she says.

Additionally she referenced Qumuaqtuq’s young age, his history with mental illness and the fact he is Indigenous.

Qumuaqtuq was born in Nunavut, but split his time between there and Yellowknife after his parents separated.

He speaks both English and Inuktitut and spent significant amount of time on-the-land with his father.

He was also diagnosed with schizophrenia.

Charbonneau told Qumuaqtuq she hopes he will use the opportunity to work on his violent outbursts, adding he is still young enough to change.

“There’s better things you can do with your life,” she says.

After time served, Qumuaqtuq will spend three years and two months in prison.

Dene Talk: A new podcast on the exploration of identity, Indigenous storytelling