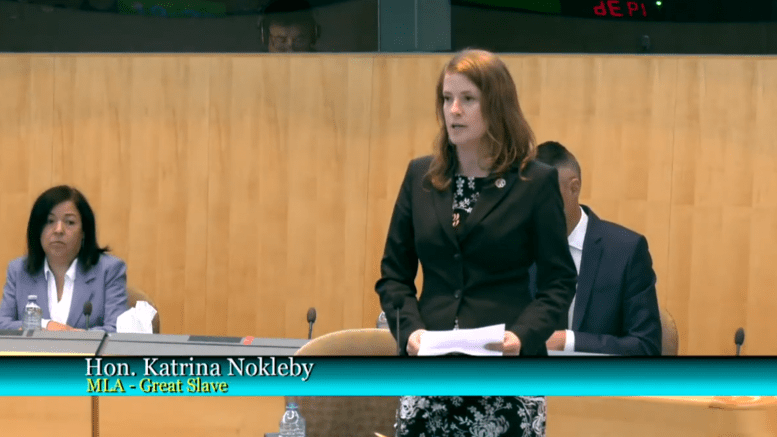 With her mask dangling from one ear, Katrina Nokleby fled the floor of the Legislative Assembly.

For two hours, Nokleby listened as her fellow MLAs criticized her performance and demeanour as minister of Industry, Tourism and Investment, and Infrastructure.

A week after Premier Caroline Cochrane stripped Nokleby of her portfolios, her fellow MLAs removed her from her cabinet seat.

Until her motion of revocation, Cochrane had been tight-lipped on the reasons for her decision to demote Nokleby.

Many of her remarks focused on Nokleby’s personal conduct.

“I accept that we can all get frustrated, even angry,” said Cochrane, “however the minister’s continued tantrums in meetings, walking out of meetings, lashing out at others and a refusal to hear from colleagues is not productive or reflective of the kind of relationships we need to effectively look after the concerns and priorities of residents.”

The premier added that the member for Great Slave had repeatedly refused to take any responsibility for her and her departments’ shortcomings.

MLAs, both regular and in cabinet, echoed many of the premier’s comments, including exceedingly slow turnaround time for requests, an unwillingness to engage and listen to regular MLAs and constant outbursts verging on abusive comments. 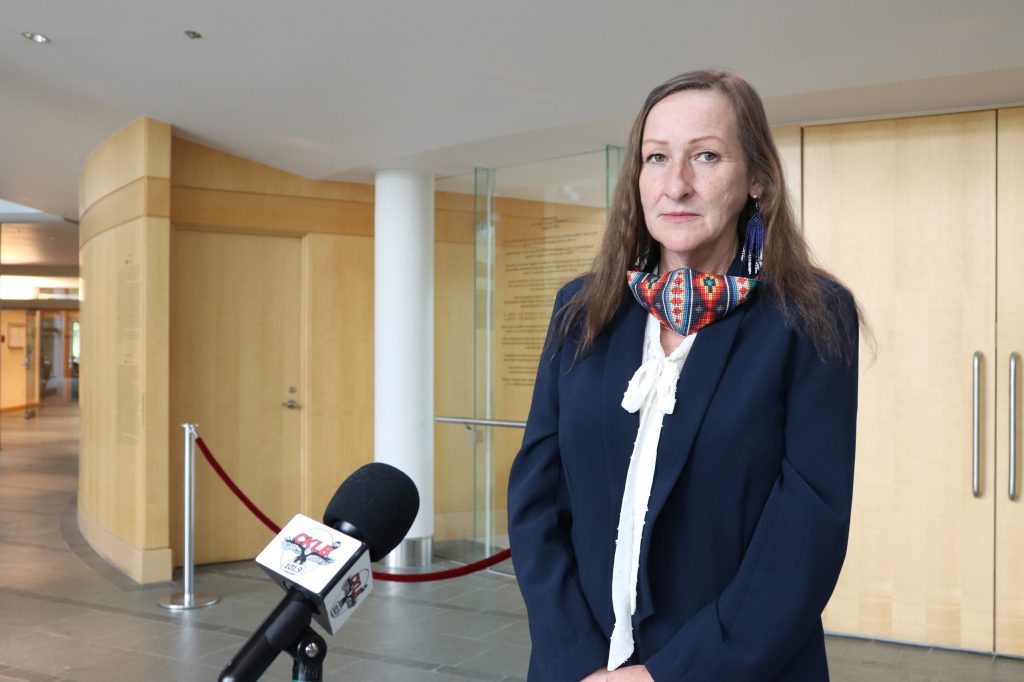 Premier Caroline Cochrane said it was a difficult day to debate a minister’s position. (Mariah Caruso/CKLB)

Several MLAs also said the current situation was “embarrassing” for everyone involved.

When it was finally Nokleby’s turn to speak, she pushed back by saying she stayed true to herself and to her position.

“I would not accept that things should stay the same simply because that’s the way things have always been done,” she said. “I had many concerns with current practices, including what I call ‘gaming the system’. I properly raised those concerns with my cabinet colleagues at every opportunity. I will continue to raise those concerns whatever my role in this assembly may be. In all cases, I carried out my duties with integrity and passion. Was I perfect? Of course not. Was I outspoken? Of course I was, that is who I am.”

Jackie Jacobson, MLA for Nunakput, and a handful of others said they had good working relationships with Nokleby.

Despite this, they also said they had witnessed inappropriate conduct and, taken as a whole, believed it was enough to remove her from cabinet.

Regular MLAs are divided on whether they were given enough time and information before the decision was made public.

Lafferty reiterated the issues with the tender for the Rae Access Road and the Tłı̨chǫ Government’s frustration with the process as reason for his decision. But this resulted in a 10-year agreement essentially giving Tłı̨chǫ companies the first say in infrastructure projects in their traditional territory.

“My vote is not a vote against the member for Great Slave, it is a vote for the Tłı̨chǫ people and the people of small communities that are so often overlooked by this government.”

This was just the latest in a series of examples MLAs used as Nokleby not being an effective minister. Others included Yellowknives Dene First Nation recently rescinding its support for the Slave Geological Province Corridor, and the slow response and implementation to the business community’s call for support during the COVID-19 pandemic.

Ultimately, 16 MLAs voted for Nokleby’s removal. Jackie Jacobson abstained, saying he didn’t have enough information to make a sound judgement, and Nokleby was the sole MLA to fight against her losing her job.

Confidentiality has been at the centre of this situation since the premier removed Nokleby’s responsibilities.

At the time, a news release said Cochrane would not be commenting further “out of respect” for Nokleby’s privacy.

This line came up time and again during the debate.

Nearly every MLA said they wouldn’t go into details due to the nature of conversations being “confidential” at the time.

Some details trickled out but the public is largely left to guess at the severity of these interactions between Nokleby and her colleagues.

Nokleby said cabinet “secrecy” prevented her from clarifying some of the accusations leveled against her.

“Secrecy and innuendo are the hallmarks of corruption and backroom dealings, not the transparent and accountable government that the public deserves,” she said. “The toxic culture of secrecy has allowed my character and professionalism to be disparaged while not allowing me to respond, reply or defend myself.”

She added that “gossip, hearsay, rumours and bruised feelings” are what led to her losing her position and that the decision “had much more to do with others than it does to do with myself or with my performance.”

In their remarks, several regular MLAs said Nokleby had three opportunities to tell her side of the story.

During a news conference after the session, CKLB asked Steve Norn, the head of the accountability and oversight committee, for details on what these opportunities were.

Once again, he said the meetings were confidential before deferring the gist of the question to Rylund Johnson, the chair of caucus.

“There were caucus meetings where these matters were discussed and Ms. Nokleby was given the opportunity to both while she was in those meetings or meetings were scheduled and she didn’t attend,” said Johnson. “She did not speak to all 19 members at any time to report to them.” 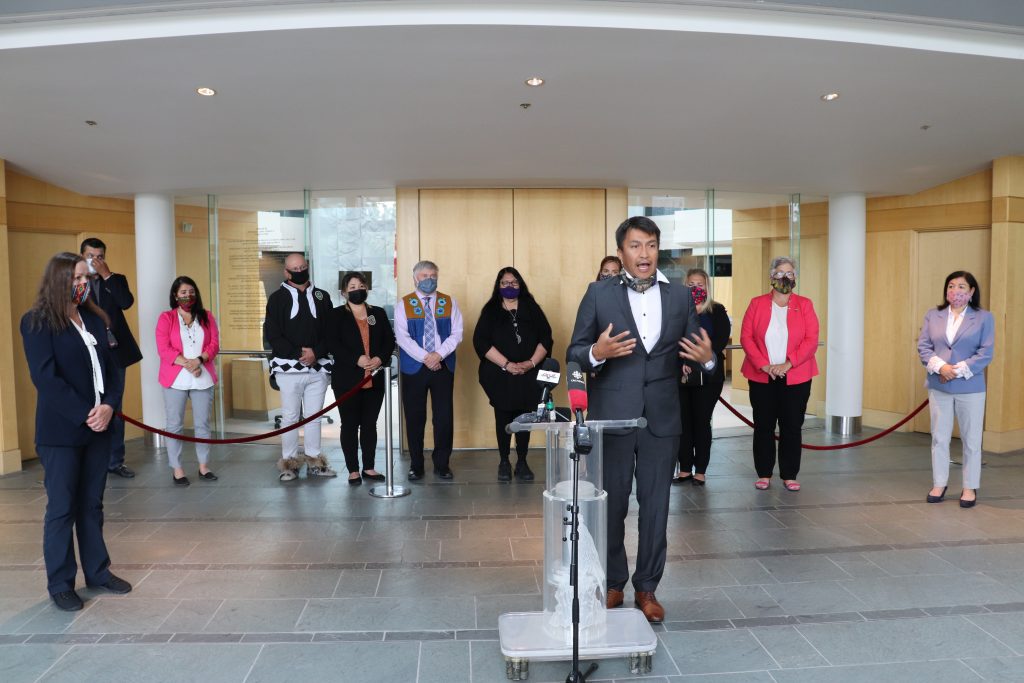 The majority of MLAs attended a news conference following the vote. (Mariah Caruso/CKLB)

One of the more striking comments the premier made was about Nokleby holding unrecorded meetings.

Ministers are supposed to disclose all meetings with outside parties in a registry and have departmental staff present as well.

CKLB asked the premier about these meetings during the news conference.

“We do have some work to do on that,” said Cochrane before chalking up some of the confusion to it being a rookie cabinet.

“Going forward it’ll be (about) reminding ministers they have to record every single visit and make sure they have witnesses… It’s about accountability, it’s about making sure we respect the public and we also respect the rules of the House and protect our ministers,” she added.

Cabinet is conventionally made up of the premier plus two members from Yellowknife, two from the regional centres and two from the communities.

Following the session, Johnson confirmed that Nokleby will be replaced by another Yellowknife MLA. With Johnson already saying he wouldn’t run, that leaves veteran MLAs Julie Green and Kevin O’Reilly, and rookie Caitlin Cleveland as possible replacements.

The selection process kicks off at 9 a.m. on Thursday, Aug. 27, with a replacement expected to be announced later in the day.

The candidates will each give a speech before all MLAs vote for Nokleby’s replacement. Then it’s up to Premier Cochrane to assign the new minister their portfolios.

She said there will likely be a cabinet shuffle following the selection of the new minister.


These grants will help students with the cost of technology equipment and internet services.


"We're hoping to get it cleaned up and put a plan together to open before the summer's out," says GNWT contractor.

MLAs eager to get to work in 19th Legislative Assembly