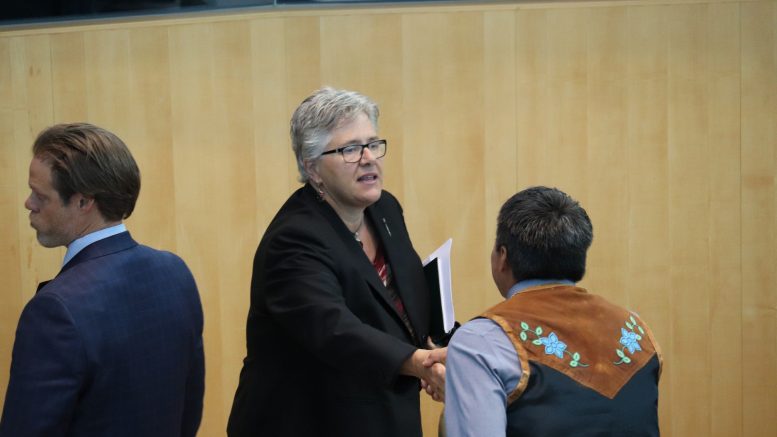 Julie Green (centre) will be appointed to the executive council. Steve Norn (right) was the lone challenger for the position, although he was ineligible as he is not a Yellowknife-area MLA. (Photo by Luke Carroll)

After a short but contentious committee meeting, Julie Green will be appointed a cabinet position.

Green, MLA for Yellowknife Centre, was the only person to run for the position.

But, Steve Norn, MLA for Tu Nedhé – Wiilideh, made the case he should be considered and expressed his disappointment when his plea was rejected.

“This is not the first time as an Aboriginal, I have been stifled by the system,” he says.

The position was available to replace Katrina Nokleby, MLA for Great Slave, who MLA’s ousted on Wednesday.

The cabinet is made up of two members from Yellowknife, two from the regional centers and two from the communities — a system that was agreed upon at the start of the assembly.

Norn, stood up in front of the committee, requesting for his riding to be considered a part of Yellowknife, arguing as a representative for Ndilǫ and Dettah that he has Yellowknife constituents.

His request received little support as numerous MLA’s as well as Premier Caroline Cochrane spoke against the motion.

“I think this is a rash decision that needs more time,” Cochrane said.

“We’ve got work to do,” said Rocky Simpson, MLA for Hay River South, “this convention has been in place and I assumed we’d all agreed to.

“We’ve got lots of issues out there and these issues are likely bigger than what we’re discussing at this hour.”

A number of MLA’s expressed that changes to the representation of cabinet could be discussed at a later date.

When the speaker asked eligible MLAs to present their candidacy Green was the only person to do so. Norn also stood and used the opportunity to express displeasure with the decision by his colleagues.

Green was then acclaimed to serve on the executive council.

She thanked her colleagues for their confidence and outlined her time working for the CBC across Canada — specifically in the NWT for nine years.

“In that time I was able to travel widely through the NWT,” she says, “and really get a feel for the diversity of circumstances in which people live and of the people themselves.”

Green also addressed the issues present in the legislative assembly.

“There is a tremendous amount of division in this house, and it is being fueled by inside and outside actors,” she says, “what we need to do is to stop with that path, with that direction and we need to start working together.”

Following the meeting, Green said she is open to whatever portfolio is assigned to her, but spoke of her record on social development with files such education, health and justice.

“But I understand that once you are elected to cabinet, you don’t necessarily have a choice,” she concludes.

Speaking with reporters after the meeting, Cochrane says with the new appointment, a cabinet shuffle can be expected soon.

“I know ministers are attached to their portfolios… But it’s time to look at the best fits for every portfolio,” she said.

A vote will take place at a later date to confirm Green as a member of the executive council.

With files from Francis Tessier-Burns

Students gather from across NWT for Youth Parliament

What an Erin O’Toole government would mean for the NWT


Supporters say O'Toole will provide more responsibility to the territory, opponents say he will be the same as Stephen Harper.