The town of Hay River got an opportunity to stand against systematic racism, inequality, and social injustice this weekend.

On July 4th, protesters, allies, and on-lookers participated in a community-wide rally and march in solidarity for Black, Indigenous, and visible minorities.

With over a hundred in attendance, say lead organizers, the BLM movement has extended itself to reach visible minorities, suffering similar injustices and prejudices over the course of history. 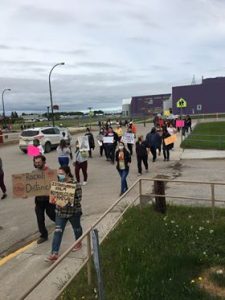 The lead organizers responsible for the event are Vigne Sridharan and Daniella Boronka, two friends who arrived in Hay River from Kitchener, Ontario.

“This isn’t about us, but standing together with black and brown voices”, says Sridharan.

They said, they went into this blindly not knowing the full effects and influence it would have on the community. The women understood that they had to do more than contribute online. “Our biggest challenge was not being well established enough in the community,” says Sridharan and Boronka. 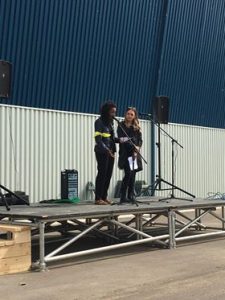 An “overwhelmingly positive response” on Facebook and social media encouraged the young women to pursue their “call to action because no one else was doing it,” they say.

The organizers have also announced the creation of a petition to address systematic racism, in the community of Hay River.

“We have to stand up and use our voice, materializing a more specific course of action. Our end goal is in creating a petition, calling upon MLA’s to address systemic racism across the territory. With the hopes of creating a long-term plan for anti-racism curriculum,” they say.

“The big thing is most Canadians think we don’t have racism, this event will give people a better idea as to what’s going on. Talk creates change. Conscious or unconscious, the system is biased and we have a responsibility to start the conversation,” says Kandic Jameson, mayor of Hay River. 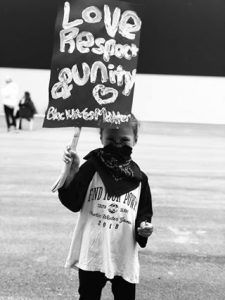 Audrey(5) holding up a homemade sign that reads “Love, respect, and unity”.

The mayor of Hay River plans on using her position of power as a white, female ally to continue the discussion and raise awareness on the issue.

In response to finding out about the petition, the mayor said, “I’ll be the first one on it”.

In an interview with CKLB radio, Sridharan shared her experience of white-passing and how she recalls going along with racially insensitive jokes, just to fit into white culture.

“My inability to react in those moments is what triggered my response to act now,” she says.

The organizer’s petition has over 200 signatures and counting. 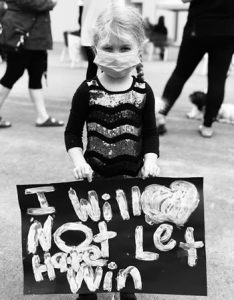 Pippa(4) holding up a homemade sign that reads “I will not let hate win”.

Charges pending after windows smashed at mall in Hay River