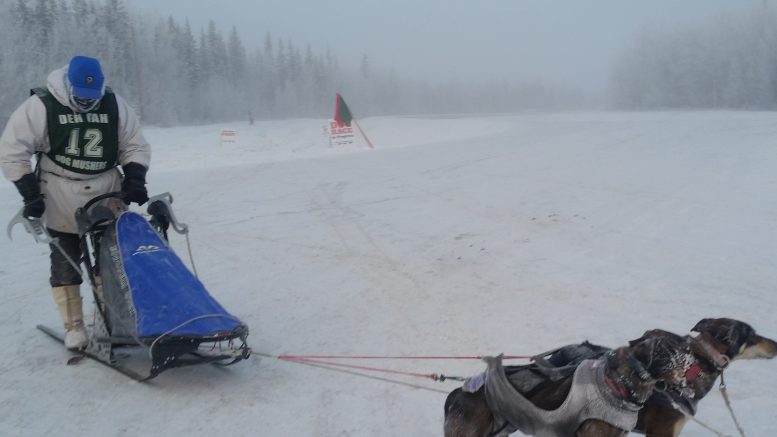 Young mushers and their support teams sure noticed the frigid temperatures in Fort Providence Thursday but if the dogs were cold,  you really couldn’t tell.

Five teams from across the Northwest Territories gathered in the Decho community for the Arctic Winter Games (AWG) sled dog racing trials.

At stake was a spot on the Team NT roster for the 2020 games coming up in Whitehorse in March.

Fourteen teams were initially registered to compete but for reasons that aren’t entirely clear, probably the cold, only five teams were able to make it.

The start/finish line was at the Big River Service centre on the outskirts of Fort Providence.

The results are as follows:

All of the teams qualified for the games.

Diedre Lafferty will be an alternate in case anything happens to either the first or second place teams. 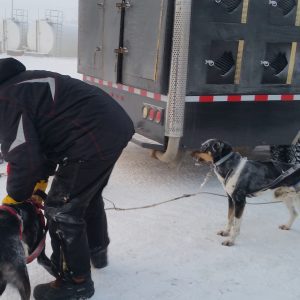 An unidentified handler hooks up dogs to their harnass

All the competitors and their support teams, mainly family, gathered for a feast and awards ceremony held at the Snowshoe Inn following the races.

All the young mushers, all in their teens, thanked their sponsors, their support teams and their dog teams.

They all pointed out that it was a really cold day but that they would not have missed it for the world.

The races could not have happened without hours of preparations including setting the course itself.

Susan Fleck and her husband, Fort Providence Mayor Danny Beaulieu were the driving forces behind the trials.

They too were extremely pleased how the races went off without a hitch.

Beaulieu in particular lamented the fact that that the upcoming AWG sled dog races may be the last at the pan-northern competition.

That’s because of a lack of funding and in some cases interest and teams to compete from other jurisdictions.

He pointed out that sled dog racing is the most Arctic and iconic of the Arctic Winter Games sports and to lose them would weaken the uniqueness and significance of the games itself. 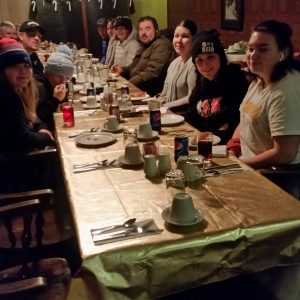 However, the young mushers were not worrying too much about the future of their discipline at future AWG.

They were just glad to have competed and finish safely.

They all said they would now focus on their preparations to try to win a Gold Ulu at the games early next year.