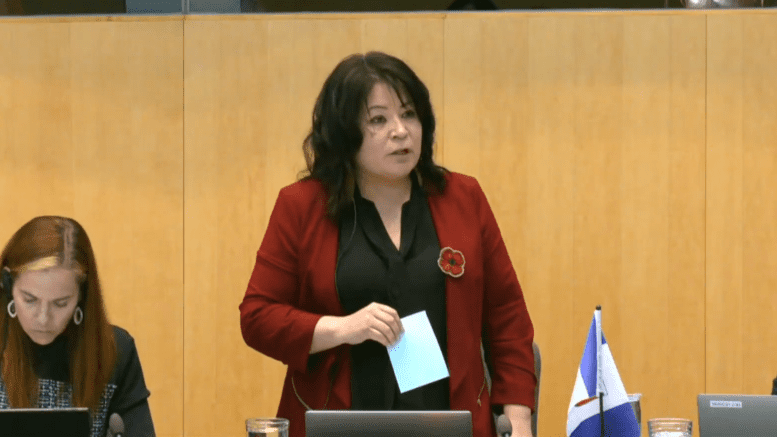 Minister responsible for Housing NWT Paulie Chinna repeatedly advocated for a public contract to be awarded to a private company whose president, along with his wife, financially supported her 2019 election campaign, according to public documents, a letter, and the former minister of Infrastructure.

According to the Elections NWT website, the president of HRN Contracting, David Hodgson, and his wife, Sherry, each donated $1,500 to Chinna’s campaign in 2019, the maximum for any person, corporation, or organization. This represents nearly three quarters of the $4,200 in monetary donations netted by Chinna’s campaign, and more than 40 per cent of all contributions to her campaign, including non-monetary. Chinna defeated incumbent Daniel McNeely by 22 votes, in that election. She also defeated two other candidates.

The contract is for the construction of the Prohibition Creek Access Road near Norman Wells. Recently, the GNWT negotiated this contract with the privately-owned, Norman Wells-based HRN Contracting. HRN was the only company to bid on the project. Construction began earlier this month.

Because HRN’s bid was significantly higher than what was budgeted — $25.3 million compared to $20 million — the call for tenders was cancelled. But in early 2022 the company successfully requested to enter into negotiations for the contract with the Department of Infrastructure. 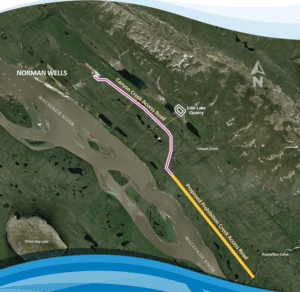 Great Slave MLA Katrina Nokleby was the minister of Infrastructure when funding for the project was first announced in June 2020. She says shortly after that funding was announced, Minister Chinna repeatedly pressured her to award the contract to HRN.

“She came and kept coming at me very, very hard,” she says.

She says she was also pressured by a “former politician” whom she would not name.

But Nokleby was removed from cabinet in August of that year before discussions could begin. During that sitting, the Premier, ministers and regular MLAs accused Nokleby of inappropriate and aggressive behaviour, and a failure to properly manage her portfolios.

During a sitting of the Legislative Assembly on Oct. 17, Nokleby raised HRN’s funding of Minister Chinna’s campaign.

“This is unacceptable,” she said. “And I ask, when are we going to stand up and start addressing the cronyism and corruption of the GNWT?”

Nokleby repeated the phrase “corruption and cronyism” when speaking with CKLB about the contract.

Two days after Nokleby’s comments in the Assembly, Minister of Infrastructure Diane Archie addressed Nokleby’s criticisms in another sitting.

She said the inflated price tag of the project was due to additional costs associated with the Covid-19 pandemic, and the gap between the approval of the project in November 2020 and the call for tenders in October 2021 was due to the design concerns at Christina Creek.

“The allegations of nefarious dealings raised in the House are fundamentally untrue,” she said.

CKLB filed an ATIP request for emails between the former Minister of Infrastructure and the Minister of Housing NWT related to PCAR or HRN. The request was denied because, under the territory’s Access to Information and Protection of Privacy Act, the definition of “public body” excludes “the Office of the Legislative Assembly or the office of a member of the Legislative Assembly or a member of the Executive Council.”

Millions more for half the project

In the beginning, $20 million was budgeted for the 13-kilometre, all-season access road. Now, that amount won’t even get the first half of the road built.

In September 2021, citing “a design concern at Christina Creek,” the Department of Infrastructure chose to divide the project into two phases, with Phase 1 targeting only the first 6.7 kilometres.

But the budget for the first phase of construction is even more than was originally budgeted for the entire project: $25.5 million in combined federal and territorial funding. Another $2.5 million was set aside for the planning and design of the entire project.

Department of Infrastructure Spokesperson Laura Busch said this increase was due to a combination of factors, including “the COVID-19 response, supply chain issues, inflation, material and labour shortages, and the rising price of fuel. “

“It’s ridiculous,” says Nokleby. “We have the capacity within the North to execute that entire project. There is no way that supply chain issues are the ones affecting us.”

“There is no way that a road should cost three-point-something million dollars a kilometer. It’s not worth it to mobilize for that amount.”

In response to questions directed at Minister Chinna, Cabinet Spokesperson Trista Haugland said HRN’s support of Chinna’s campaign “did not influence her decision.”

“To exclude the views of an MLA who also happens to be a Minister would be detrimental to the fair consideration of such proposals, and letters of support have often been included in assessments made under the Policy. There has been no improper consideration or favour given related to this contract.”

The territory’s Negotiated Contracts Policy does require the Executive Council to consider whether the business seeking to enter into negotiations has the support of the member representing the affected region.

Haugland did not respond directly when asked if Chinna pressured Nokleby into awarding the contract, and instead, referred back to Chinna’s letter of support.

“In her capacity as MLA, she was advocating for economic development and jobs for her region and communities, as would any elected MLA who represents their riding,” said Haugland.

HRN did not respond to a request for comment.