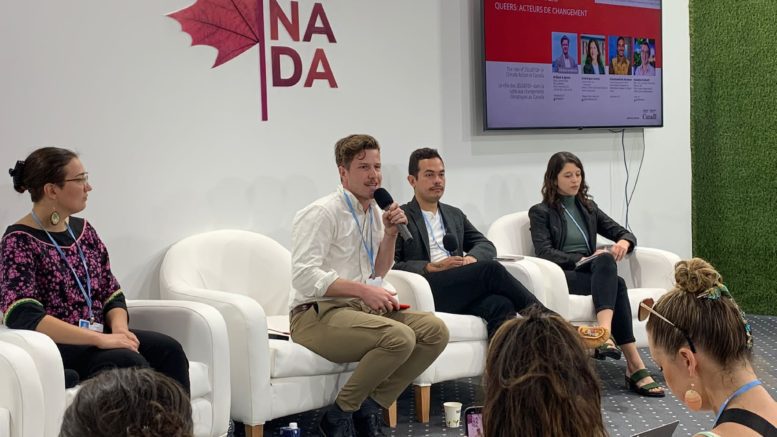 Will Gagnon speaks at the Queer Changemakers panel on Nov. 14. (Photo courtesy of Will Gagnon)

When Will Gagnon was preparing to speak at this year’s United Nations Climate Change Conference, he knew he was risking arrest and persecution.

He was prepared to take extra steps for his own safety, including asking a friend to pose as his wife and, he says humourously, “Maybe I’m gonna wear cargo pants, and [hide] my homosexuality for those two weeks.”

Gagnon is a Yellowknife-based engineer and climate activist who chairs the Northern Council for Global Cooperation. He was the host of the “Queer Changemakers” panel at this year’s COP27 in Sharm Al-Sheikh, Egypt. The goal of the panel was to highlight the contributions the Queer community can make to climate science.

But Human Rights Watch has called Egypt one of the worst offenders against LGBTQ+ rights in the region: Members of the Queer community are regularly jailed and persecuted for engaging in same-sex acts.

One Canadian Queer couple who were supposed to participate in the panel decided not to attend for fear of their safety.

Inuvik-born Katarina Kuhnert, who studies community responses to climate change, particularly in the circumpolar north, says she understands their unwillingness to travel. “As [they] said when they decided not to travel for our panel, we’re not martyrs,” she says.

She says both the support of the Canadian State and the international Queer community were key in making sure the event went forward.

Hailing from a country like Canada, “It provides a material benefit when when the state is supportive of you, and not every country has that, so not every person internationally has an equal opportunity to access these spaces with the support of their state.”

Despite the uncertainty, says Kuhnert, “Our event was full. It was full of people, there were people standing outside of the chairs so that they could stand in the room. And I think that is a powerful example of how Queer communities find each other.”

Both Gagnon and Kuhnert said they would be open to participating in another similar panel in the future. This is no small commitment, since next year’s COP is in the United Arab Emirates, where same-sex relations are punishable by jail time.

But Gagnon says he wants to use his position as a Canadian citizen to make a difference.

“I hope this is the beginning of a tradition where we try to change the narrative,” he says. So using Canada’s power and privilege in those events to hopefully make it easier for Queer folks in those countries.”

Kuhnert has already seen this change starting to take place at home: She was involved with this year’s first-ever Inuvik regional Pride parade. “I met those youth from all over our region who are brave enough to be themselves, and to stand in front of their communities proud and ask to be treated well,” she says. “And I watched as Elders and adults stood up to support them, including Elders who came to pray at Pride and to walk and accompany people. And I know that that comes from our community.”

Residents will pay for carbon tax despite offsets: NWTAC