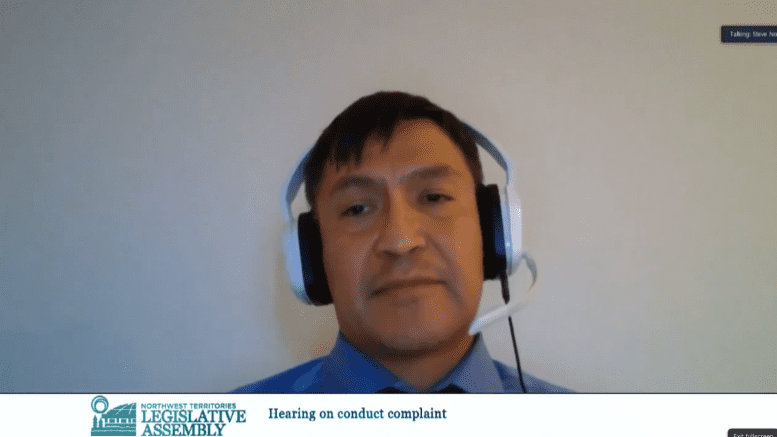 Steve Norn testified on the fourth day of the hearing into a conduct complaint against him. (Screen capture)

Despite two emails and a call saying he had to isolate on April 18, MLA Steve Norn says he still didn’t realize he broke isolation when he went to the Legislative Assembly on April 17.

Norn was supposed to isolate beginning on April 4 after returning from Grande Prairie, Alta. In explaining why he went to the Legislative Assembly on April 17, he said he counted 14 days forward from his date of arrival. While this does line up with April 17, Norn had received an email confirming his self-isolation plan (prior to isolating) that said he was to isolate up to, and including, April 18.

He testified that despite getting an email and call on April 18 that said it was his last day of isolation, he still did not realize he broke isolation rules by visiting the Legislative Assembly.

It wasn’t until he received a positive test result on April 21, and he called Rutland that evening. During the call, Rutland informed Norn there was video footage of him at the Legislative Assembly on April 17.

“That’s when it first clicked,” said Norn. “I realized ‘Darn, I have my dates mixed up’.”

The fourth day of the hearing into a conduct complaint against him saw Norn testify for most of the time.

During his testimony, Norn reiterated several times that he was “sleep-deprived” and “exhausted” in April.

He attributed the date mix up and not being forthcoming with information to this factor.

On Wednesday, Norn’s ex-partner testified that she brought their daughter to see Norn on April 8, while he was supposed to be isolating. Their daughter had returned from a trip to British Columbia. Norn embraced his daughter during the brief meeting.

“That was a lapse in judgement, I supposed,” said Norn. He added that his daughter called out to him from the car and he had a “natural” reaction to go and see her.

At times, he said he felt like there was a “siege” from the number of calls, messages and comments directed at him on social media.

After testing positive for COVID-19, he went to an isolation centre, where he said he was not allowed to leave or go outside.

Some of his family members, including his youngest daughter, ex-partner, and his girlfriend’s daughter all tested positive too.

He said he felt “powerless” and “panicked” at the situation.

While being questioned by Maurice Laprairie, the lawyer for the adjudicator, Norn said in hindsight he recognized the risk posed by going to the Legislative Assembly and seeing his daughter while he was supposed to be isolating.

Norn’s lawyer, Steven Cooper, characterized the trip to the Legislative Assembly, Racquet Club, visit with his daughter, and interactions with the contact tracing team all as “mistakes.”

Premier asked Norn to say he had COVID

During his testimony, Norn said he received a call from Premier Caroline Cochrane the evening of April 22.

By then, Norn said he informed some of the other MLAs of his positive COVID-19 result.

Norn said the call was short but the premier was “stern”. He said she urged him to “come forward” to say he and a family member had tested positive.

When questioned by his lawyer, Norn said he’d felt pressured by the premier to disclose the information.

The following day he issued a media statement announcing he and a family member had tested positive. In his announcement, Norn said he did not have any symptoms, something he maintained while testifying.

Prior to Norn’s testimony, Laprairie wanted to present a message Norn sent to fellow MLAs on Oct. 3, the night before the start of the hearing, via Facebook.

Laprairie read the note: “I just want to say f**k you for making my loved ones cry. You squeezed my heart. Whoever backed this, I’m coming for you.”

Laprairie said the message was threatening and “raises concerns regarding the obstruction of this inquiry process and the possible intimidation of any MLA who would have been called to give evidence.”

Cooper argued that the message fell outside of the terms of reference set for the hearing, which focus on his isolation activities in April.

Ronald Barclay, the sole adjudicator overseeing the hearing, decided the message could not be submitted as evidence, and Norn could not be questioned on it.

Following the hearing, Barclay must provide a report and recommendation on further action against Norn. This can range from a fine to Norn losing his seat as MLA. It is up to the rest of the MLAs to put those recommendations into action.

The hearing is scheduled to continue on Friday at 9:30 a.m.