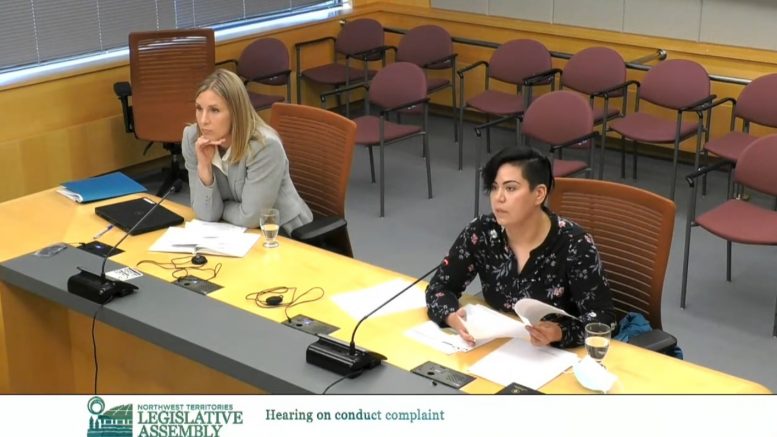 Stephanie Gilbert (right) is a registered nurse and is the COVID outbreak clinical coordinator. She was one of the people to conduct Norn’s contact tracing investigation. She testified for more than two hours. (Screen capture)

Adjudicator Ronald Barclay heard that MLA Steve Norn gave conflicting accounts of his whereabouts during the contact tracing investigation by public health back in April.

Wednesday was the third day of the hearing into a conduct complaint against Norn.

‘A couple of days makes a difference’: COVID outbreak coordinator

Stephanie Gilbert is a registered nurse and is the COVID outbreak clinical coordinator. She was one of the people to conduct Norn’s contact tracing investigation.

Gilbert said she’s participated in about 600 contact tracing investigations. Compared to the average case, she said the Norn investigation was “much longer, more complicated, and certainly at times, stressful and difficult.”

She said that when he was first interviewed in late April, Norn did not inform the contact tracing team he went to the Legislative Assembly, instead stating that he was home on April 17.

In another interview a few days later, he changed his account to say he had gone to the Legislative Assembly on April 18, not 17. He also said that he had attended the Yellowknife Racquet Club on April 19, not 18.

Earlier in the hearing, the adjudicator learned that Norn received a letter saying he was supposed to isolate up to, and including, April 18.

Gilbert said bringing an epidemiologist is not a regular occurrence, but happens “when we feel that we need to really dig deeply into an investigation.”

In Norn’s case, Gilbert said the team felt “that we were missing details of Mr. Norn’s exposure timeline, and we weren’t getting a true sense of the risk involved.”

This, she said, was because public health had gotten “numerous” calls from the public self-identifying as a COVID risk after potentially coming into contact with Norn. This was after receiving calls or messages from Norn and after he had been identified as a positive case.

Gilbert said the office of the chief public health officer (OCPHO) obtained video footage that showed Norn at the Racquet Club on April 18. OCPHO then asked Gilbert to question Norn again about his activities.

In both instances, the contact tracing team received the clarifying information within about a day of their interviews with Norn.

Gilbert explained why the date discrepancy is important: “The fact that we hadn’t been told by Mr. Norn to begin with… That was difficult. And what makes it difficult is that when we’re talking about COVID, and the incubation period and communicable periods of that disease, a couple of days makes a difference. It means that we are losing time in terms of notifying contacts. And every contact that is out there that doesn’t know they were exposed has the potential to then expose others. So if somebody is unable to give us an accurate story, an accurate account of their activities, it puts others at risk.”

Between the two situations, the exposure at the Racquet Club had more potential contacts. Robert Braine, a security guard, was the only identified contact at the Legislative Assembly. Braine testified on Tuesday that he tested negative for COVID-19.

It also took multiple interviews with the contact tracing team before Norn said he had an interaction with his daughter while they were supposed to be isolating separately.

Norn’s ex-partner Natasha Schwindt testified that their daughter returned from travel outside of the NWT while Norn was in isolation. Schwindt and Norn had already separated and were to isolate separately.

Norn had been isolating since April 4, after returning from travel to Grande Prairie, Alta.

Schwindt said she brought their daughter to see Norn for a brief visit after she returned from travel on April 8. She said the visit lasted three to five minutes, but that her daughter did have a close interaction with Norn in that time. She added that she knew she was breaking isolation protocols.

Following the wastewater COVID-19 detection on April 19, both Schwindt and her daughter tested positive. The wastewater detection called for people isolating between April 14 to 17 to get tested. Norn also went to get tested after the notice, and also received a positive result.

She said that public health did not say where they may have contracted the virus from. She recently learned family members her daughter visited in April also tested positive for COVID-19 after the trip.

According to Gilbert, Norn told the contact tracing team that he had a second interaction with his daughter on April 17. However, Schwindt said neither she nor their daughter had contact with Norn other than on April 8.

The adjudicator also heard that Norn delivered a package to his friend Su-Ellen Dillabough the afternoon of April 18. Dillabough testified that during her interaction with Norn, she maintained social distancing other than to receive the package with “outstretched arms.”

Dillabough said Norn contacted her when he received a positive test for COVID-19 and she immediately isolated. She tested negative.

Confusion around 14 days of isolation

The issue of how public health determines 14 days of self-isolation came up again on Wednesday.

Throughout the hearing, it’s been unclear whether the time of day is taken into account when determining when residents have completed their self-isolation.

During Gilbert’s testimony, she said Norn told the contact tracing team that he believed his isolation was done if he did not report any symptoms on that 14th day of isolation.

This was echoed by Schwindt and another witness, Trisha Smith, who lived with Norn from May 2020 to May 2021.

During her testimony, Smith said Norn told her he was going to the Racquet Club on April 18 — the last full day of their isolation. When asked whether she had concerns about that, she said no because she thought they were done isolating.

Norn began testifying when the hearing resumed on Thursday morning.

The adjudicator does not have the power to reprimand Norn. He can only make recommendations to the other MLAs, ranging from a fine to Norn losing his seat as an MLA.