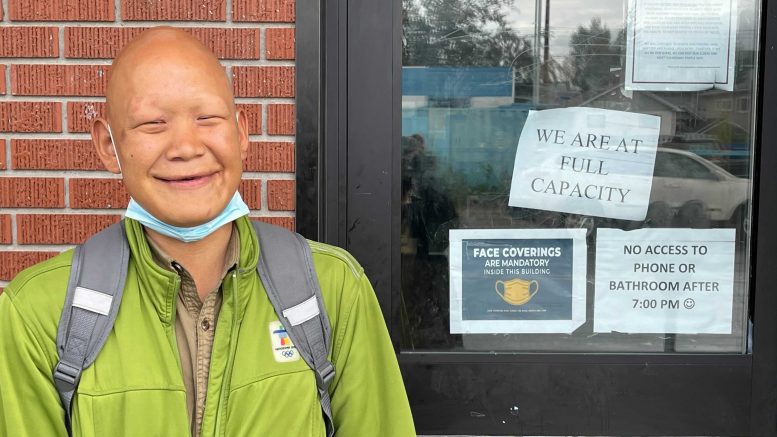 “Winter time, it’s not a time you want to be sleeping outside,” says Tuktimak. “We've already lost enough people on the streets since I've been here." (Mariah Caruso/CKLB)

Every day Kyle Tuktimak tries to get into the day shelter and sobering centre in Yellowknife, but he says most of the time he can’t.

He points to the shelter door and reads off a sign taped to the inside window: “WE ARE AT FULL CAPACITY”

The day shelter and sobering centre have been at reduced capacity for more than a year due to COVID-19.

But to Tuktimak, that’s just the latest symptom of a homelessness issue that’s been going on well before the pandemic.

Originally from Cambridge Bay, he’s been on the streets in Yellowknife since 2016.

With reduced capacity, Tuktimak says people who have been left outside the shelter can become louder and more aggressive. As if almost on cue, some men nearby start yelling in his direction.

Having an additional shelter, says Tuktimak, is “important for everybody.”

“You have more places for (people) to go, it’s gonna be a lot quieter downtown,” he says.

In early August, the Government of the Northwest Territories put out a public call to try and find a location for a temporary day shelter.

“It is necessary to find additional shelter space to support those experiencing homelessness in Yellowknife before the cold weather returns in the fall,” reads a news release.

It adds the territorial government looked at more than 30 sites but none were suitable “because of several factors including environmental remediation issues, inability to meet program needs and opposition from neighbours not wanting this type of facility in their area.”

In June, neighbour resistance, red tape and miscommunication all contributed to the Northwest Territories Health and Social Services Authority withdrawing its application to use Aspen Apartments as a location for meals and showers for people facing homelessness.

“People, in general, need to have more compassion,” says Wilbert Cook. “Nobody wakes up one morning and says, ‘I’m going to be homeless today. There’s a reason, a very deep-rooted reason, because of atrocities inflicted upon them when they were younger, maybe it has to do with intergenerational trauma.”

Cook is the executive director of the Arctic Indigenous Wellness Foundation, which runs the urban on-the-land camp behind the Fieldhouse.

The camp is known for providing breakfasts to people on Yellowknife’s streets. But it’s been closed after being declared a high exposure setting by public health earlier this month.

Tuktimak says he misses the breakfasts and staff.

“The staff over there, just so much better,” he says. “They treat you with respect.”

William Greenland is one of those staff. As one of the camp’s councillors, he says giving people time and space to just talk is crucial to their healing.

“Some of these people, they have really good values, a lot of good history,” says Greenland.

Cook said the camp would be reopening on Monday, Sept. 6.

Shelter outside of Yellowknife

CKLB asked where he’d like to see the temporary shelter, Tuktimak suggests having one even further out of town than the camp. 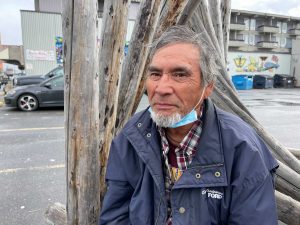 Peter Modeste echoed that feeling. The 73-year-old is originally from Gamètì. He says he’s had nowhere to go in Yellowknife for the past four months. Every day, he too tries to get in the day shelter.

He says he has a cabin along Highway 3 but no money or vehicle to get there.

Modeste wants a home where he can be independent, where he can cook his own food and go out on the land to provide for himself.

While he sees family every once in a while and they try to help, he says he doesn’t want to burden them long-term.

Greenland brought up the point of having a clear vision for the goal of the upcoming shelter.

“What are we sheltering (people) from? Is it the elements outside? Is it alcohol? Are we sheltering them from people who are drinking around them?” he asks. If that’s the case, then he agreed that having a space outside of Yellowknife could work to remove people from a downtown setting.

He said it also solves problems of people not wanting a shelter near their neighbourhood.

“Right now, wherever they’ve thought of, it offends other people,” he says.

However, Bird says all locations were considered but “the preferred location for the day shelter is within Yellowknife’s downtown core.”

“It’s important to locate these types of services in the area where the need is, which is downtown, and near other related support services – such as overnight shelters, mental health and addiction counselling services, housing and income assistance offices, etc,” he said.

‘Back where it was a year ago’

The deadline to submit a location to the GNWT was on Aug. 20. CKLB has reached out to the Department of Health and Social Services (HSS) for how many submissions it received.

Jeremy Bird, a spokesperson for the department, said in an email there were three submissions that the HSS is reviewing.

No matter the number, Nick Sowsun says it never should have gotten to this point.

Sowsun is an advocate who created a social media page to share information on an additional shelter. He created the page around this time last year when the territorial government and city couldn’t agree on an additional shelter location. The GNWT ultimately declared a state of emergency to convert the former SideDoor building into a shelter.

“I’m concerned that the situation seems to be right back where it was a year ago,” says Sowsun.

The yellowing leaves are a reminder that winter is mere weeks away.

If history is anything to go by, says Sowsun, it’s unlikely the permitting process — including any appeals — is to wrap up before then.

“A year later, my thought is maybe a little bit more planning needs to go into this,” he says.

Sowsun says he’s in contact with shelter staff who have told him there have been “missed opportunities” to meet with businesses, other neighbours and shelter users to create a better relationship and try to break down the opposition of a new shelter.

Long-term, Sowsun says he’d like to see better coordination between many agencies, but “crucially the various levels of government”, to try and address homelessness from different perspectives.

For now, though, a temporary day shelter is still needed and fast.

Modeste, Tuktimak, and others facing homelessness need a space to stay warm when winter hits.

“Winter time, it’s not a time you want to be sleeping outside,” says Tuktimak. “We’ve already lost enough people on the streets since I’ve been here… We could have been saving this years and years ago by getting more buildings for us. If they had gotten more buildings for us, we wouldn’t have lost so many people on the streets. This year was the craziest year for us.”

By now, it’s cliché to say the pandemic has highlighted systemic gaps, but being a cliché doesn’t make it untrue. COVID-19 causing reduced capacity at the day shelter and sobering centre is an immediate concern.

The government has also announced a permanent shelter coming for 2024. But shelters will always be a band-aid solution to a wound that buildings — no matter the size and number — will never be able to fully address.

With files from Mariah Caruso.