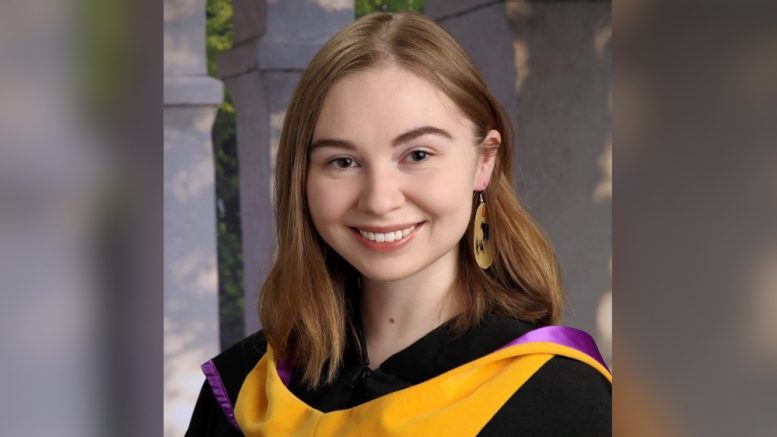 After graduating with a prestigious university award, Laney Beaulieu of Deninu Kųę́ First Nation is one step closer to becoming the first doctor from her community.

Beaulieu graduated from Western University two weeks ago with a double major honours degree in biology and medical sciences.

She received the Gold Medal for the Western Awards Ceremony awarded to the student with the highest standing in each major in an honours double-major degree.

Beaulieu was also one of three students selected to deliver a speech during the ceremony, which included a land acknowledgement and congratulations in Dënesųłı̨né.

A lack of representation

Beaulieu now plans to attend medical school, after which she hopes to return to Deninu Kųę́ to work as a physician.

“We have so few Indigenous doctors in Canada and even fewer who work in their communities,” she said. “I think that it’s really important for Indigenous physicians to be working in Canada. Because we know our history extremely well, and we know our people really well, and that allows us to really give culturally informed care.”

“We have a really high turnover rate of nurses and doctors in the Northwest Territories through no fault of their own. It’s hard to live up here if you don’t have family and don’t have any connection to the North,” she explains. “But when you leave after two years, and then you get a new doctor, you have to get all up to speed with everyone.”

Beaulieu says the dream of becoming a doctor has been a lifelong goal of hers, being raised by her grandmother who was the community’s nurse from the mid-1970s until 2013.

“I pretty much spent all my time after school up in the nursing station,” Beaulieu explains, “and I always wanted to be like my grandma.”

Despite the impressive accomplishment, Beaulieu credits her community for helping her make it to this point — she took the time to thank everyone from her family to her preschool teachers.

She says this support extended to while she was at school.

“My grandma would be going out to the store and I’d call her and everyone at the store would be like ‘How’s Laney doing? I hope she’s doing well, tell her I said hi’,” Beaulieu said.

Although it was a positive ending, Beaulieu says there were low points along the way.

“I struggled a lot with loneliness especially in my first couple of years,” she said. “Going from such a small community of 500 people where I literally know every single person I see on the street, to going down south where no one knows who you are.”

She added one thing that helped her move past that loneliness was finding her own family on campus.

“What really helped me was getting involved with the Indigenous Students Association, because it’s kind of like a home away from home.”

She served as the vice-president of communications and was an executive member for a year.

The organization held cultural events throughout the year including a large powwow.

An escape through art

Art was another outlet for Beaulieu while attending school.

“I’ve always liked to draw a bit, but I got really into art during COVID,” she explains.

Her work got featured on the cover of a prominent professor’s report on Indigenous health and well-being during COVID-19.

Beaulieu also designed a mural on a wall on the Western campus.

“I graduated, kind of leaving my mark there,” she said.

But Beaulieu will have the opportunity to continue leaving her mark as she will be returning to Western in August for medical school.